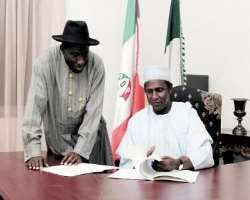 Abuja (THEWILL) - The drama emanating from the absence of ailing President Umaru Yar'Adua continued on Wednesday in Abuja as both the Nigerian Vice President Goodluck Jonathan and attorney general Michael Aondoakaa denied the existence of a letter from Aondoakaa asking the VP to fill in for the president.

However, THEWILL can authoritatively reveal that the Vice President actually shunned the letter sent to him by the attorney general.

Mr. Aondoakaa had written the Vice President on Tuesday relying on Section 5 of the Constitution, which he said was superior to Section 145. The VP we were told bluntly rejected the letter claiming it was unconstitutional for him to perform presidential duties since the President has not officially written to the leaders of the National Assembly on his hospitalization as required by the Constitution.

Nigerian President Umaru Yar'Adua was admitted more than a month ago at the King Faisal Specialist Hospital in Jeddah for acute pericarditis and complications linked to churg strauss syndrome. THEWILL had reported a week ago that the President would not return to Abuja this year because of his frail health.

The signing of the 2009 supplementary budget, the swearing in of Justice Aloysius Katsina-Alu and Justice Isa Ayo Salami are pressing assignments waiting for the President.

Meanwhile, two Nigerians, former minority leader in the House of Representatives, Farouk Aliyu and Sani Gabbas on Wednesday asked a Federal High Court in Abuja to declare that the President's continued absence on health ground constitutes permanent incapacity to perform the duties of President as stipulated in Section 146 of the Constitution.

The plaintiffs through their lawyer, Mr. Bamidele Aturu have urged the court to compel Vice President Goodluck Jonathan to assume the duties of the President and sign the 2009 supplementary budget into law.

They also want to court to determine:
I. Whether having regard to the fact that the President who has not been on vacation and has been undergoing treatment at a hospital outside Nigeria in Saudi Arabia since November 23, 2009, the Federal Executive Council ought not to be compelled to pass and publicize a resolution as to whether or not the President is incapable of discharging the functions of his office;

II. Whether the absence of President Yar'Adua from Nigeria and from his constitutional and statutory duties for medical treatment since November 23, 2009 at a Saudi Arabia Hospital without being on holiday does not constitute permanent incapacity within the meaning and intendment and general meaning of section 146 of the 1999 Constitution; and

III. Whether having regard to the circumstances surrounding the absence of President Yar'Adua from Nigeria and from his constitutional duties for medical treatment it is unlawful for the vice-president to refuse to exercise the functions of the office of the President of the Federal Republic of Nigeria.

Just like a similar suit that was filed last week by activist and lawyer, Mr. Femi Falana, the suit has attorney general Michael Aondoakaa and the Federal executive Council as defendants.

No date has been scheduled for hearing of the matter.