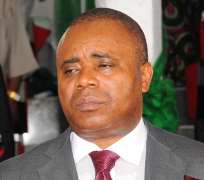 All is not well in the Akwa Ibom State camp of the All Progressives Congress (APC) as the former minister of Petroleum, Atuekong Don Etiebet engages the governorship candidate of the party in a dirty fight on who emerges as minister from the oil rich State.

Our correspondent gathered that horse-trading over ministerial appointments from the President-elect General Muhammadu Buhari has severed the relationship between the two fair weather friends and neither of them now sees eyeball to eyeball, after getting into a broil on who should be presented as ministerial nominee to represent Akwa Ibom State in the Federal Executive Council.

Sources said the position would have been Mr Umana’s for the pick if not for multifarious reasons that have dogged his path as a politician.

Firstly, General Buhari is said not to be disposed appointing those who defected to APC on the eve of the election to use the party as a platform to achieving their ambition.

Apart from that, General Buhari is also said not to be comfortable with the profile of Mr Umana who having spent all his life as a civil servant is said to be richer than the former head of State.

General Buhari is said to perceive Mr Umana as a very corrupt public servant. During the last Gen Buhari’s visit to Uyo for his campaigns, he was said to have bemoaned the extravagance lifestyle of Mr Umana Umana, and even accused him openly of being corrupt, a situation which contributed to Buhari’s refusal to accede to Umana’s subsequent desperate campaign plea.

Our checks also revealed that Mr Umana may also miss out of the ministerial appointment due to his expression of intention to challenge the election of Mr Udom Emmanuel at the tribunal.

Our source said: “Umana cannot aspire to be the Governor and a minister at the same time. If he goes ahead to challenge his defeat at the election tribunal, he has to wait for the verdict of the court, in this case the Supreme Court, and if the case of Frank Okon is anything to go by, you know it might take UOU up to four years,” the source said.

It is also on this last note that former Petroleum Minister, Atuekong Don Etiebet is also laying claim to the ministerial slot of the State. Our correspondent learnt that before the former Minister recently travelled abroad after the election, he had reached out to APC big wigs to be considered for the slot.

Our source said Atuekong Etiebet went into a rage when he was reminded that the position should be reserved for the gubernatorial candidate of the party in the state, Mr Umana. Etiebet is said to have carpeted Mr Umana as greedy. He told close associates that Mr Umana cannot seek to be Governor and Minister at the same time.

But Atuekong Etiebet also has his own baggage. The albatross on Etiebet’s neck is the $180 million Halliburton scandal which he was clearly indicted.

In 2009, the former Oil Minister was quizzed over allegation of having received $50 million as his share of the Halliburton bribe, a situation that has made inner caucus members of the Buhari Campaign Organization to be skeptical about tar on his image.

Throughout the eight years of Godswill Akpabio as governor, no Annang person was appointed as a Minister so it should be the turn of Annang now,” Etiebet is quoted as saying.

However a source close to Buhari confided in us that neither Etiebet nor Umana may get the ministerial slot for Akwa Ibom as both of them have corruption baggage perceptions that may dent the image of the new administration.

However, one person who may benefit from the scenario is Senator Ita Enang, who has commenced lobbying of highly placed former colleagues in the APC to curry attention. He is allegedly banking on the fact that with neither the incoming governor nor deputy from Uyo senatorial district, it was logical that his district produces the Minister.

Beyond that, Ita has made it clear that as a senator, it will be easier to scale through the senate hurdles, a feat which he claims cannot be actualized by either Etiebet and Umana who could easily be stopped by the three senators from the State on the floor of the senate.

“You can see how Senator Obanikoro took a bow and sailed through on the floor of the senate eventhough his state senators refused to clear him, and to avoid such scenario, it is not advisable for our party to sent a greenhorn for that position to avoid unnecessary embarrassment,” Senator Enang confided with our source.

Currently all the three men are busy trying to outdo each other to impress General Buhari by engaging in resolute open media wars against the government of Chief Godswill Akpabio and by extension the incoming governor Udom Emmanuel.