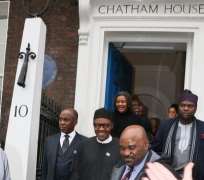 A chieftain of the All Progressives Congress (APC), Chief Eze Chukwuemeka Eze, has congratulated the President-elect, General Muhammadu Buhari (rtd.), describing his victory in the March 28 presidential election as being well deserved.

Eze in a statement issued Wednesday morning in Port Harcourt also congratulated Nigerians for their wise choice in voting for Gen. Buhari and the APC, describing this as the beginning of the rebirth of the country.

Setting an agenda for the incoming Buhari administration, Chief Eze, the former National Publicity Secretary of the defunct New Peoples Democratic Party (nPDP), said: “Nigerians expect nothing less than the reinvigoration of our economy, arresting the menace of corruption which was the hallmark of the outgoing PDP government led by President Goodluck Jonathan, eradication of the menace of Boko Haram and reassurance on the security of lives and property of Nigerians, particularly making tangible efforts to get the Chibok girls out of the dungeon of Boko Haram, creation of jobs for our teeming youths, as well as embarking upon policies and projects to unite our country and renew the faith of Nigerians in good governance.”

He noted that “when the G7 Governors, former Vice President Atiku Abubakar, Alhaji Abubakar Baraje, Prince Olagunsoye Oyinlola, Dr. Sam Jaja and other patriotic Nigerian leaders met at the Yar’Adua Centre Abuja to do a parallel Convention after the leaving unconstitutional PDP Convention at the Eagle Square on 31st August 31, 2013 to form the defunct New PDP, very few people gave the group any chance of surviving, but that proved to be the beginning of the end of PDP’s days in power.”

He recalled: “Exactly on 9th September, 2013 I was appointed the National Publicity Secretary of the defunct New PDP and with the help of the then National Chairman of the party, Alh. Abubakar K. Baraje, and National Secretary, Prince Oyinlola, Nigerians could bear witness that we did our best to salvage the dying PDP but President Jonathan and Bamanga Tukur did not give us any chance in this regard, thus leaving us with no alternative than to merge with other progressive parties on November 26, 2013 to form the APC but without the Governors of Niger and Jigawa states, both of whom chose to remain in PDP.

“We took the struggle to emancipate Nigeria and free her from charlatans and the shackles of the undemocratic elements impoverishing and misgoverning our country to APC and today that August 31, 2013 move has succeeded in giving us this new hope we all are currently cherishing.”

Chief Eze prayed for God to give APC leaders the wisdom to carry along every interest bloc in the party so that APC may continue to witness the growth and progress. “Along this line, I wish to appeal for the even spread of appointments so as to give everyone a sense of belonging. As much as I appreciate the efforts of the APC National Working Committee (NWC) to ensure justice in the appointment and zoning of offices, I respectively appeal to them to ensure that justice is done to the party’s component groups since it is a historical fact that APC is an amalgam of the defunct Action Congress of Congress, All Nigerian Peoples Party, Congress for Progressive Change, New PDP and a faction of the All Progressives Grand Alliance,” he said.

Chief Eze equally advised that the South-South and South-East geo-political zones should not be punished because of the voting pattern as the elections in the two zones were massively rigged in favour of PDP and the results did not in any way reflect the wishes of the people of South-South/South-East.

The APC chieftain advised the party and President-elect Muhammadu Buhari to be wary of the May 28th proposed dinner with outgoing President Jonathan. This, he said, “is laden with a lot of suspicions and undefined motives and should be discarded to avoid us being caught in whatever sinister motive is behind the idea. The handover should be done publicly on May 29th as is the tradition. There is no need for any dinner and secret handing over to Gen. Buhari.”