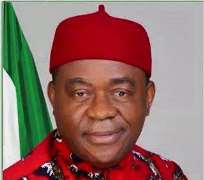 A group known as Abia Progressives Initiative (API) has raised the alarm over alleged plot by the governorship candidate of the All Progressives Grand Alliance (APGA) Dr. Alex Otti to rig the Saturday April 25 Supplementary polls in connivance with some INEC officials and the military.

In a statement signed by Ugochukwu Onwukwe and Edwin Ugochukwu Coordinator and Secretary of API and made available to newsmen, the group demanded for the immediate removal of the returning officer, Prof. Benjamin Ozumba, the Resident Electoral Commissioner(REC), Prof. Celina Oko, non-deployment of military and effective policing of the affected polling units during the supplementary polls.

It reads: "Out attention has been drawn to the clandestine moves by Abia State Governorship candidate of the All Progressives Grand Alliance(APGA), Dr. Alex Otti to unleash mayhem on innocent Abians in connivance with military and blood-tasty thugs in the forthcoming April 25 re-run election in the state.

After a failed attempt to hoodwink the Gubernatorial Returning Officer into annulling the duly collated results from Obingwa, Osisioma and Isiala-Ngwa LGAs, Otti in his desperation has resorted plans to instigate crisis in most of the affected polling units using soldiers and thugs to scare away voters, cart away electoral materials and thereafter concoct outrageous results that will cancel Dr. Okezie Ikpeazu 83,053 lead.

"This perhaps informed the reason why Otti has continued to boast that the April 25 re-run election has already been concluded. He claims to have the Army and INEC by his side as well as enjoy the full support of the Returning Officer, Prof. Benjamin Ozumba who conferred on him the honorary doctorate degree at the University of Nigeria Nsukka(UNN) and his cousin whom he also claimed to have facilitated her redeployment to Abia as the Resident Electoral Commissioner(REC).

For instance, since after the April 11 election, Otti has not stopped boasting about how he brought one Brigadier-General Amosun from 82 Division of the Nigerian Army Enugu to chase away PDP agents, Transition Committee Chairman Obioma Ekpem and other security agents, arrest and unlawfully detain some PDP supporters, took over Aba South LGA headquarters which also served as the collation center and finally rig the election to prove that he remains in control of Aba.

"It is in view of the foregoing that we request that appropriate measures be put in place to ensure a credible rerun election devoid of harassment, intimidation and rigging in the affected polling units.

These measures include removal of the Returning Officer, Prof. Benjamin Ozumba, the REC, Prof. Celina Oko, non-deployment of the military to the polling units and collation centers and effective policing of the affected polling units.

We also demand immediate investigation of the military involvement in rigging the election in Aba South and North LGAs as well as the activities of one Brigadier-General Amosun of the 82 Division.

These decisive steps including INEC purging itself of the corrupt officials that had earlier connived with some security agents to rig the April 11 election for Otti in some local governments will largely prove the umpire's preparedness to conduct a credible and acceptable rerun election come Saturday April 25".