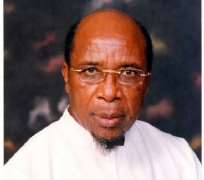 Anambra State Governor, Chief Willie Obiano paid tribute Monday to the departed Senator Uche Chukwumerije, saying he was a presidential material that could have been harnessed but for the age factor. Obiano however said the Abia State born political leader acquitted himself creditably at the Senate where he served for three terms, describing him as a first class senator.

Governor Obiano said the death of Chukwumerije at this time would deny the country of his reservoir of statesmanship. 'His was a life of public service. He was preoccupied with the fate of his nation and worked tirelessly to see it attain its full potentials. He was not daunted by the difficulties of transforming the country into a great nation. His faith in the possibilities of our national renewal was palpable.'

Obiano who noted that the late comrade was a rare breed, said he was among the few who could sustain differing positive qualities at the same time. 'He was a foremost intellectual who could also be simple and down to earth. His erudition did not get in the way of his communication. Although a leader and elite, Uche saw himself as a member of the working class and treasured the comrade title. He was at once native and cosmopolitan.'

Chief Obiano said Chukwumerije's pan – Igbo vision which centred on unity and renaissance had enduring relevance for the Igbo nation. The need for the reclamation of our language and celebration of the rich, Igbo cultural heritage are tasks which we need to pursue with greater commitment. His passing on at this time reminds us of the unfinished task of strengthening regional integration to give our bloc greater voice.

The Governor observed that at this period of constitutional review process, the emergence of a balanced federation would be a fitting tribute to the labour of past Nigerian patriots like Chukwumerije.

He prayed God to grant the late senator's family, the people of Abia State and indeed all his admires the fortitude to bear the loss and grant his soul eternal rest.