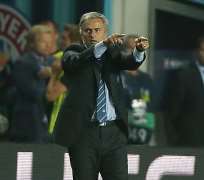 Mikel, who has been injured for more than six weeks was named on the bench and came in for Ces Fabregas in the  90+2 minutes  of the game. The Referee added 4 minutes to the normal 90 minutes.

'The team were fantastic. I'm the one that knows how fantastic they were because the game was exactly what we wanted. When you manage to play the game you want to play, it's fantastic. The players were magnificent, on top of that Eden had that magic the top players have, especially in big matches.Mourinho during his post-match conference, praised his players for a job well done as they edge closer to winning the Barclays Premier League title.

'Obviously he was fundamental for us but Cahill made an amazing block on Falcao, John Terry was amazing, the keeper was there for us all the time, Azpilicueta was for me the best player on the pitch and Ivanovic was fantastic. Matic worked like an animal, Zouma put Fellaini out of the game, our number 11 [Drogba] was another animal, fighting against two kids young enough to be his sons. Hazard was what you know, Oscar worked fantastically well, Ramires came in and gave us what we needed, Mikel came in for two minutes and held the ball,' Mourinho stressed. Agency news