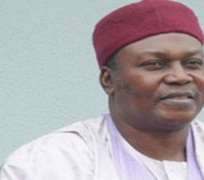 This is coming as normalcy finally returned to Jalingo, Sunkani in Ardo Kola local government area and Gembu, headquarters of Sardauna Local Government Area. The Head of Department, Enlightenment and Publicity, Mr. Phebian Yame, who announced the date for the election during a briefing at the head office of the Commission in Jalingo, said the date has been communicated to all the parties involved. INEC had declared the gubernatorial election in the state inconclusive and ordered based on the fact that cancelled votes in the election were more than the margin between the votes polled by Ishaku who came top in the election and Sen. Alhassan who was runner up.

The margin between Darius Ishaku who polled 317,198 votes and Senator Alhassan who polled 262,386 votes was 54,812 while the canceled votes were 127,125. In declaring the elections inconclusive, the returning officer, Prof Kyari Mohammad explained that the Constitution of Nigeria and the Electoral Act stipulates that when the difference between the total canceled votes in an election is higher than the margin between the first and the second person, elections should be declared inconclusive and a run-off should be conducted.

The run-off election would be conducted in all the 165 polling units of Donga local government as well as some polling units in Bali, Karim Lamido, Takum, Ussa, Wukari, Yorro and Zing.