The People’s Will Finally Triumphs In Anambra 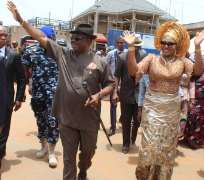 As the results of the House of Assembly election began to filter in on Sunday evening in Anambra State, sporadic songs of victory broke out on the streets of Nnewi, Awka, Onitsha and of course Aguleri. All around the state, there was a general sense of re-validation; a re-ignition of the kindred spirit that washes over brothers who have fought gallantly in a war against the invaders of their patrimony and brought the opponent to his knees in absolute defeat.

It was a titanic battle between hegemonic forces that had made a loud statement penultimate week with a brazen show of raw power from above, trampling on the will of Ndi Anambra with Armed Personnel Carriers (APC) to dubious victory in the National Assembly elections. As Ndi Anambra watched these war vehicles roam the arteries of Anaocha and environs where Hon Uche Ekwunife and former Governor Peter Obi held sway, they muttered in rueful silence as only violated people do.

Of course the brazen thwarting of the people’s expressed wish for a stable and sustainable leadership under the ruling APGA as demonstrated by the hijack of the collated results of the last National Assembly election by PDP stalwarts in the state did not come as a surprise. The cocktail of violence, intimidation, manipulation and verbal terrorism unleashed by leading PDP elements in the state were all intended to knock the confidence of the rank and file of the ruling APGA and give the impression of a federally backed occupation army whose take-over of Anambra State was a fait accompli.

It was this war strategy that led to the tasteless invasion of Idemili North by a serving federal minister with a band of kill-and-go security agents to wrench victory away from APGA and hand it to his younger brother who never really campaigned for office. It was also this misplaced feeling of invincibility that allegedly led the national chairman of Transformation Ambassadors of Nigeria (TAN) to engage in senseless assault and battery of debonair oil magnet, Ernest Azudialu Obiejesi (Obijackson), leaving him in a heap of agony like one ran over by a rhinoceros . Reports also claimed that some people took the bullet from the bodyguards of some high profile PDP figures in the state during the NASS election. This worrisome!

To many people, the emerging scenario looked very much like a sleep-walk back into a horrifying nightmare – a return to the long dark nights of the muscle-men who pillaged the state and rode roughshod over the people’s sovereignty. It was a challenge that grated on the nerves of the peace-loving people of Anambra State but more so for the leaders of APGA and the party’s teeming members. But perhaps more pointedly, it was the ultimate test for Governor Willie Obiano whose leadership as governor and Chairman of BoT of the party had suddenly come under a serious question. As it turned out, it was a test that Obiano handled with all the dexterity that his technocratic background could provide.

Drawing on his Aguleri heritage as a conflict strategist, Governor Obiano’s first act was to re-assure the troop that though the enemy may have seized some precious territories, his hold on those territories was tenuous. In a state-wide broadcast, he adroitly revved up the flagging confidence of the electorate with telling words. “Fellow citizens, I want to assure you that the dubious victory of the PDP in the National Assembly Elections of last Saturday shall not stand! We have assembled the necessary documentary and material evidence that will expose the bare-faced lies of the PDP and retrieve the mandate that you graciously gave to all APGA candidates from the law courts. We shall do everything humanly possible to ensure that justice is done to our people and we shall not relent until victory is achieved. Please, don’t lose hope!” he assured them.

Not surprisingly, Obiano’s words chimed in with the outrage of the people. It began to suddenly dawn on Ndi Anambra that the cheeky manipulation of their electoral power should not go without a challenge. It began to occur to them that silence was not a virtue where outrage was required and that if they did nothing, the invading army would be emboldened to move in and finally crush their collective will. So, spontaneous reactions ensued. Prominent citizens of the state came out to openly condemn the results of the March 28, 2015 election. A coalition of Igbo youths took to the streets, fanning out across the Awka, Nnewi and Onitsha to register their displeasure. Groups of independent observers of the election addressed press conferences and discredited the results of the election. A war of words ensued between the invaders and the innocent citizens whose only wish was to be allowed to lick their electoral wounds in peace. It was upon these troubled waters that Governor Obiano made his second broadcast, rising like an astute general to calm the waves and restore the confidence of the people in the capacity of his administration to maintain the peace.

Assuring the people that what happened on March 28, 2015 would not repeat itself, Chief Obiano made a plangent plea that found instant resonance with the people. Said he – “We have once again come to the crossroads of history. A time comes that rarely comes in life when a people who are desirous of a lasting change must say so in a profound way. Ndi Anambra; that time is now! The time to secure our future with our votes has finally come…We have demonstrated that when government is sincere, open and honest, our people will heed the clarion call for greatness. We have shown that power belongs to Ndi Anambra and that together we can build a prosperous state…Ndi Anambra, anyi bu ife! (We

are the light).” Such words that were intended to pull at the strings of the people’s heart and stir them to full consciousness.

As it were, Obiano’s rhetoric re-ignited the flagging spirit of the people and moved them to action. With their backs against the wall, the people of Anambra State found the audacity to say “never again” to the invading army that steamrolled into their peaceful communities in Armored Personnel Carriers. They said so in thunder! They resisted attempts to snatch the ballot boxes in Ekwusigo local government. They foiled the efforts to upturn the results from a polling booth in Agulu. And finally, when the results began to trickle in, it was a clean sweep for their beloved APGA. Their fight-back had not gone in vain. The popular will of the people had triumphed against the devious manipulative stratagems of an influential few. That is the way it should be in a true democracy!