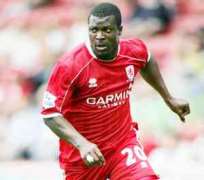 David Moyes insists Yakubu Aiyegbeni still has a future at Everton despite the striker struggling to rediscover his best form this season.

Yakubu suffered an Achilles injury in November 2008 and has scored just five goals since returning to first-team action in the early weeks of the campaign.

He has looked a shadow of the player who cost the Toffees £11.25million from Middlesbrough in 2007 and his lack of goals has prompted suggestions he could be offloaded in the summer.

However, Moyes is confident the 27-year-old can get back to his best and believes it is hard for Everton to sign the quality of striker needed to improve his team.

'I have said to the players that we have to be more clinical in front of goal, but goalscorers are the players who cost big money, and that is where it is hard for a club like Everton to compete with the top clubs,' said Moyes in the Daily Mirror.

'You have to pay the big money to get them and we can't do that. But we have Louis Saha and Yakubu, who have got quality and give us the goals we are looking for.

'Yak has struggled, but he has a future with us.
'He has had a difficult year, but he has worked hard to get back into condition and we want to give him every opportunity to get back to where he was.

'I hope he has the appetite to get back to what he was. He trains well, but what Yak thrives on is goals.'