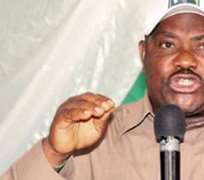 Like the Presidential Poll in Rivers State where a lot of INEC materials were hijacked by unknown gun men, the Governorship and State House of Assembly polls in some identified risk areas also witnessed a repeat of what happened during Presidential poll in the state.

There were shooting and hijack of electoral materials in Obio/Akpor, Ikwerre,Ogba/Egbema/Ndoni, Gokana, Buguma and Asari/Toru Local governments areas of Rivers State.

In Ikwerre Local government area, the LGA of Governor Chibuike Amaechi where one Mr. Henry Worgu, an APC leader was shot; He was immediately rushed to the hospital and a source from his family said the APC supporter is in a critical condition.

Under this Local government, INEC officials and materials arrives the various communities and units at about 10:40-10:57 am and accreditation started late including voting.

Though, elections were peaceful in some of the communities in the area.

At Igwuruta in Ikwerre Local Government, unit 5 and 6 were cancelled by the INEC due to suspected irregularity.

Ward 3, unit 5 of Elele community was also cancelled after some unknown armed thugs stormed the unit and hijacked the voting materials.

Ogba/Egbema/Ndoni Local government had been on negative news of political killing for the past two weeks and voters were not surprise on the turnout of event during the governorship and House of Assembly elections in the area.

The APC youth leader in the area Hon. Cleaver Orukwowu was murdered by unknown gunmen in military uniforms by 12:01pm.

He was shot while trying to resist the armed men from carrying the electoral materials.

INEC materials at Omoku, Egi ward 5 and 6 were also carted away by armed thugs.

Another APC supporter in Ogba/Ebema/Ndoni Local government whose name was yet to be confirmed when this report was filed was reportedly shot death at Omoku town while arguing with the opponent that the materials sent to their units were fakes.

The APC chairman in the area, Mr. Felix Ejechi who confirmed the killing of its members in the area said most of the polling units in Ogba/Ebema/Ndoni Local government area witnessed shooting and hijack of INEC materials by armed thugs allegedly suspected to be members of the Peoples Democratic Party (PDP).

He said, “Gunmen have taken hostage of most of the wards and units in the area, for now two persons in the area have been confirmed death. Most of the materials brought in were fakes; of course, we cannot accept that, but to ensure that those units were cancelled.”

Reacting on the fake materials, the INEC National Commissioner in-charge of Akwa-Ibom, Cross Rivers and Rivers State, Thelma Iremiren said the issue of fake materials on the field is a mere rumoure that should not be considered by voters.

At Etche Local government area, some wards are not experiencing election while other communities are exercising their civic responsibility. This is was due to a security report that a police officer in the area was arrested with voting material and result sheets belonging to the wards where elections were not taking place.

In Obio/Akpor Local government area, the home town of the PDP governorship candidate in Rivers State Chief Nyesom Wike, armed men invaded some wards in the area and carted away electoral materials.

At ward 15 and 16, INEC materials was hijacked but APC in the area mobilized their supporters to ensure that election in the two wards was cancelled. They protested immediately at the INEC office in the area and the wards was canceled and rescheduled for tomorrow.

However apart from the areas where hoodlums invaded, the elections generally were peaceful in some part of the State.