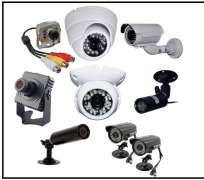 The Delta State Labour Party (LP) have purchased CCTV cameras ahead of the Governorship and the State House of Assembly election which is due to hold on Saturday 11th April, 2015. The Diaspora Deltans for Ogboru (DDO) in partnership with The Campaign Against Political Correctness, a Non-Governmental Organization purchased 3,500 sets of Mini CCTV cameras from Henry’s Electronics Limited to be installed at various polling units in Delta State to help fight against electoral fraud.

Great Ovedje Ogboru who previously contested the governorship election three times, and adjudged to have won all three times against his opponents but was rigged out, as Delta state is one of the States in Nigeria where electoral fraud is highly and widely practice by members of the State Ruling Party, the People’s Democratic Party (PDP). There are ‘ghost’ votes from the riverine areas of the state which the People’s Democratic Party (PDP) have always used to rig election in their favour. But with the Cameras being mounted in hidden positions of each of the polling units, will help counter and check this electoral fraud.

The Cameras were mounted by Datapoint Microsystems Limited at various polling stations across the state after the March 28th Presidential elections, which are being monitored from various secret situation controlled rooms in the heart of Warri and in various Local Government Areas of Delta State. The Cameras will help counter those ghost votes and the malpractice which the PDP have always used to rig election. When contacted, a spokesman for the Labour Party, name withheld said “We are in the days of technology, where we can use technology to fight criminal act. In the western world, CCTV cameras help a lot in fighting crime and in our case will help fight electoral malpractices. Our Agents cannot do it all by human factors, so with these Cameras, we shall be able to monitor each polling units for the malpractices going on and have video clips of such activities, so the authority can have someone to punish for any malpractice or misconduct on the parts of INEC adhoc staffs, REC, Returning and presiding officers and the Nigeria security agencies. We have been through such activities in the past and also in the last Presidential election, which was held recently, on March 28th 2015. We all saw the malpractices. With these cameras in place, I believe it will help a lot. I would welcome other political parties or their candidates to also take this as a challenge to help stop electoral fraud in Nigeria. We all want free and fair elections, where the votes of the people shall count and have value. The people have been voting but their votes have always been robbed by the ruling party in the state. we won’t let that happen this time around.”

The cameras have already been mounted in hidden locations of various polling centres across the state. We were able to visit one of the secret situation rooms of the Labour Party in Warri city, Delta state, where various polling stations were monitored by wide LCD screens and computers and Mobile phones. This is a welcome development for Nigeria democracy to help fight electoral fraud. The governorship election is set to be held in the 25 Local governments of the state, which shall commence by 8:00am on the 11th of April, 2015. Card readers shall be used as mandated by the Independence National Electoral Commission (INEC). The commission also mandates that wherever they should be failure of the card reader’s machine, the election shall be postpone to the following day.