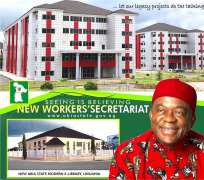 On 14 March 2015, one Eddy Odivwri published an insidious article in the revered ThisDay newspapers with the title, “Abia: Democracy Space as Regulated Fiefdom”. The picture of Governor Theodore Orji was well engraved on the article. Odivwri, perhaps, did all that in order to woo his paymasters for 'a job well done'.

Odivwri has showcased that he was among the persons who have made the business of writing to look like a wicked career due to disinformation they dish out to the unsuspecting public against their prey. But he forgot that Governor Orji is not in any competition with any governor in or outside the country. What this means is that the governor has said it the umpteenth time that he has fulfilled all his electioneering campaign promise and stands tall to hand over the baton of power to whoever that wins in the forthcoming election.

Having said that, it was cruel on the part of Odivwri to have written that, “Those who know say Gov T.A. Orji has paid greater attention to his vain title of “Ochendo Global” (whatever that means) than ensuring that even the refuse which keep mounting on the Aba-Port Harcourt express way (by Osisioma junction) are cleared. Rather than improve, the streets of Aba and Umuahia are degenerating into squalors. There is hardly much that can be celebrated in Abia State on account of the sitting governor's ability. Yet, he revels in the deceitful accolades of his hangers-on.”

In Igbo we do say that those who do not know where the rain started to fall on them will not know where it will end. By his name, it is obvious that Odivwri is a wayfarer, someone who is not abreast with the happenings in our dear Abia State, but is working on sentiment and hearsay and injuriously malicious judgments of the opposition politicians in the state. It is pertinent to let Odivwri know that well-meaning Abia people are happy with the governance of Ochendo Global and not what the opposition politicians present the state to look like in the eyes of the world.

Much as we know, opposition politicians would always be in the game of destructive criticism instead of being constructive. Odivwri, although, did not know that Governor Orji has done many Legacy Projects as were contained in his electioneering campaign promises. The bright Chief Press Secretary to Governor Orji, Mr. Charles Ajunwa, would refer to such sentiment as expressed by Odivwri as "a wishful thinking and a huge political joke" or journalism joke. For example, recently, the Abia State Government, through Ajunwa, asked the loquacious governorship candidate of the Progressive Peoples Alliance (PPA), Chief Chikwe Udensi, to first clean the mess in his (Udensi's) “confused house and his dead party before making unfounded allegations” against the current administration.

In the cause of exploration for this rejoinder, the administration of Governor Orji, inter alia, has achieved the following feats in the areas of education and other infrastructures.

In education sector, Governor Orji has built model primary schools in the 17 Local Government Areas of the state that are fully equipped to international standards. He also has refurbished so many primary schools that were dilapidated across the state. In the same vain, he has built model secondary schools across the state fully equipped to international standards. He approved bursary for all Abians in tertiary institutions.

These projects are verifiable. It behooves on Odivwri to know when to make political pulsation from pummeling. The son of the governor, Chinedum Orji, a civil engineer that he mentioned in the article is a philanthropist and has been running his business outside the government. He does not manipulate the government of the state, besides, he has never held any political appointment in the government. Let Eddy Odivwri look elsewhere whenever he wants to mislead the general public with such article of his, and not at Abia State.