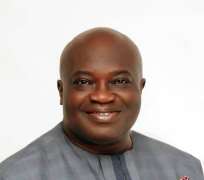 The slogan of Dr. Okezie Ikpeazu's Governorship campaign, 2015 is a clarion call based on moral principles akin to the biblical injunctions: do unto other men as you will have them do unto you.

There are many dimensions. The desire and qualification to govern or be governed is the right of all. In Abia, this the political calculations is domiciled on a tripodal pedestal but one leg of the tripod is hanging, therefore the plea by Okezie Ikpeazu and group for it to go round.

Going down memory lane, the world has witnessed discrimination and denial of rights based on Race, colour, tribe sex, religion and others. Most of the time, it is based on wrong premises. Viewed sociologically, it reminds us of Charles Cooley's theory of The Looking Glass Self. In clearer terms, how we see ourselves does not come from who we are but rather from how we believe others see us. This is stereotypical and can make us feel superior or inferior. It gets to an antisocial dimension where a group of people discriminated against accept the opinion of the profiler that they are un-achieving and thus behave as profiled.

In the heydays of racial discrimination in Europe and America, there were so many slogans against the blacks. There were taunts in the military that “black guys are weak guys”. Some children know nothing about racial discrimination but are indoctrinated by their parents who frighten them that touching a black person can dirty their cloths.

Such negative profiling were issues that troubled the world for a long time dating from the emancipation in America, which made one time president of America, Thomas Jefferson (1743–1826)

to exclaim, 'We hold these truths to be self-evident, that all men are created equal, that they are endowed by their Creator with certain unalienable Rights, that among these are Life, Liberty and the pursuit of Happiness.'.

As observed in history, African renaissance and the anti-colonial struggles in Nigeria and other African States were fired by the ex-service men who returned from the World War II. Their discoveries though very chilling were verves that stoked the fire of resistance. One of such stories is that the white person was as vulnerable as the black. Those who fought alongside the white men in war saw that the bullets that kill the Blackman can kill the white. He saw in most of the cases that black person showed gallantry and resilience in most of the military drills like crawling; walking tight ropes and running long and short races.

The emergence of African American sportsmen like John Baxter Taylor jr, the first to win an Olympic gold medal in 1908 were eye openers. In 1936 the world was embarrassed in the Olympics in Berlin Germany when Hitler who supported the Nazi propaganda of Aryan Race superiority and depicted Africans to be inferior refused to shake hands with James Cleveland, alias Jesse Owens who won four gold medals in the Olympics of that year. In other circumstances at home, the Osu cast system enjoys the same negative profiling for which many have suffered in love, marriage, education and even religious positions. This is odious and should not be allowed.

This is a similar situation where the Ukwa na Ngwa people, multi-talented and hardworking with vast arable lands and skills have been denied the topmost place in Abia politics for flimsy reasons. In fairness to the founding fathers, they experienced power discrimination and usurpation and crafted a paper to enable others in Abia enjoy all the good things of life in socials, economics and politics.

Not to belabour the charter of Equity, the present political situation is that Abia has 3 Senatorial zones and the Ukwa na Ngwa have some vote superiority as they are domiciled in 9 Local Government Areas even though only five are within the Abia South Senatorial Zone. According to Emile Zola, French Author, 'If you shut up truth and bury it underground, it will but grow and gather to itself such explosive power that the day it burst through it will blow up everything in its way.'

With the new world order, these negative profiles have lost their false values and people are becoming wiser that according to the writ of emancipation that all men are created equal and endowed with the same ability to work and live happily. The recent blackmail that Ndi Ngwa will seize people's houses is a hate message.

The Ukwa na Ngwa in Abia South and the rest of Abia are marching gallantly behind Okezie Ikpeazu. Okezuo Abia is a principle that pleads for justice and equity. It is generally known that what is good for the goose is not so bad for the gander. If the political offices, enjoyment of the sweat of our labour and allocations go round to all in Abia, there will definitely be peace. Let us get this round the zones to put smiles in all the faces.