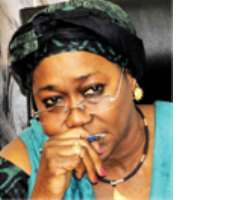 According to part of the 22-count charges, the accused persons and others at large, on or about September 28, 2009, within the judicial division of the High Court of the Federal Capital Territory, did dishonestly withdraw the sum of N464, 500(Four hundred and sixty four thousand, five hundred naira) from the account of one Apeh Samuel at Guaranty Trust Bank without his consent and thereby committed an offence punishable under Section 287 of the Penal Code Cap 532 Laws of the Federation, 2004.

Also on or about 9th October, 2009, the suspects did dishonestly withdraw another sum of N210,000 (Two hundred and ten thousand naira) from the account of one Oladipo Adekunle Emmanuel at Guaranty Trust Bank without his consent and thereby committed an offence punishable under Section 287 of the Penal Code Cap 532 Laws of the federation, 2004. On December 12, 2009, the same suspects withdrew another N270, 000 (two hundred and seventy thousand naira) from the same account. They also withdrew the sum of N156, 000(One Hundred and fifty six thousand naira) on October 12, 2009, from the account of one Musa Danjuma Mohammed at Guaranty Trust Bank without his consent.

After listening to their charges, all the accused pleaded not guilty. Prosecution counsel, Barrister Joshua Saidi prayed the court for accelerated hearing saying the case is very sensitive to the nation. He also told the court that it will be in the interest of justice for the defence counsel to file their motion for bail application jointly with different affidavit instead of the piecemeal approach which they were already adopting. Justice Talba agreed with the prosecution and adjourned the motion for bail till Wednesday December 16, 2009. But Counsel to the eight accused, K V Egbufor presenting a medical report, pleaded with the Judge to allow her client to be detained at the EFCC custody instead of going to Kuje Prison because he suffers from kidney related problem.

The Judge however promised to write to the authorities of the Kuje prison to keep them abreast of his medical history. He also fixed March 29, 2010 for trial.

It would be recalled that the suspects who specialize in cloning ATM cards which they use to illegally make cash withdrawals from victims' accounts were apprehended by men of the Department of State Services at Nordy Meridian Hotel, along Utako district, in Abuja , and handed over to the EFCC. The arrest which was facilitated through a tip-off caught the scammers unaware. Mavwen Jefe, who is the ring leader, confessed to the EFCC that he was involved in such acts. He said a friend of his who is a computer programmer introduced him to the business and sold the card writer with which they clone the ATM cards to him at the rate of N400,000 (four hundred thousand naira). “I have a friend by named Ogene Oru who introduced me to this business. We used to repair handsets and computer laptops together in Warri. At first I didn't know it could work until one day when he got someone's ATM card details, brought it to the hotel room where we were staying in Warri. “He inputted the card details on the laptop, then sent it to the card reader and swiped the card in it. The details automatically went on the card and we went to a nearby ATM machine where we cashed about sixty thousand naira. So when I saw it worked I asked him to get me one. After securing the card reader and laptop, I moved to Abuja where I and my elder brother started the business.” Mavwen further revealed to EFCC Operatives that their victims are usually trailed at the ATM machine points. He said they go around town looking for crowded ATM locations where they can't be easily spotted. They join the queues and pretend to be waiting to make withdrawals. He said in the process they spy the victim's pin numbers as they are inputting it on the system, the details of which they take back to their hotel room where the cards are cloned. “What we do is follow people at the ATM machine, sometimes if they have problems using the ATM machines or when the network is bad, we pretend as if we want to help, collect their cards and quickly memorize the card details. When they are pressing in their pin numbers, we also take note. Most times we queue up with the crowd pretending to be waiting to withdraw cash. “From there we try to peep to see what numbers the ATM user inputs, and because we have crammed all the numbers and their positions, it is very easy for us to quickly memorise it. I don't go to the ATM machines often, but send my brother Churchill, who comes back to give me the details. I have an ATM card with UBA bank that I usually use. It doesn't matter if we use the card over and over again, once we get the details on the laptop and transfer to the card reader, automatically, the new details will replace the old one on the card.” Mavwen said. He added that he has made up to 3.3 million naira from the deal. Part of the money he said was invested with a micro finance bank and the remaining he uses for his up keep. Another member of the fraud syndicate is Omomoh Paul, a 26 year old graduate of Mechanical Engineering from the Federal Polytechnic, Auchi. Omomoh who is a close friend to Mavwen said he joined the group upon an invitation from Mavwen. He also confessed to all allegations at the time of interrogation. The third suspect, Churchill Jefe, 28, who is a brother to the ring leader, said he is also a student of the University of Abuja distance learning programme, where he currently studies political science in his second year. Churchill said his brother introduced him to the business which made him quit his job of supplying construction materials to estate developers. He said he has made 800 thousand naira from the deal since he joined. “I am usually the one that goes to the various ATM machines to get the details. I will spy on the card details and immediately store it on my phone which I then forward to my younger brother in the hotel. When I get back, we sit down and clone the cards together and the next day, we set out for withdrawals.”, he told operatives After the arrest, a search was conducted in their hotel apartments and items used in perpetrating their evil acts were recovered from there. These items include: Two computer Laptops, Banks documents, GSM telephones, Eight ATM cards, a cash of N136, 935, two cars and an ATM card cloning machine