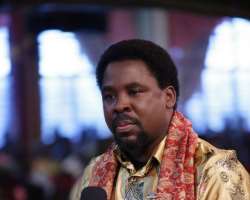 “And she made a vow, saying, 'O LORD Almighty, if you will only look upon your servant's misery and remember me, and not forget your servant but give her a son, then I will give him to the LORD for all the days of his life, and no razor will ever be used on his head' " (1 Samuel 1:11).

The 'Fruit of the Womb Service with Prophet TB Joshua' was indeed a great one. The event which was held on Friday, the 11th of December 2009, in The Synagogue, Church of All Nations, was attended by a large crowd both from and outside Nigeria.

The atmosphere was pregnant with expectation as couples who had nursed their barrenness for many years thronged the church in their thousands. TB Joshua's message 'There is a way out' encouraged the desperate couples that the prayers of many years from their living churches were not lost.

The service commenced with a long line of jubilant mother and proud fathers together with their bouncing babies – those who had come to testify to what God had done in their lives.

Dr. and Mrs. Iwu Justice testified to how God had touched them after the previous Fruit of the Womb service 5 Dec, 2008. They came to The Synagogue, Church of All Nations to thank God for giving them a child after years of barrenness – a stigma difficult for them to bear.

Mr. and Mrs. Shedrack also gave glory to God for touching them after last year's Fruit of the Womb Service with Prophet TB Joshua and came with their bouncing baby to the event. Mrs. Shedrack further said that the God who did it for her will surely do it for those who came for this year's service. She further said, “As you see this place, it is the arena of solution. Don't discuss with your neighbor about the food you want to eat, just be focused during the service. Look at the man of God eyeball to eyeball”.

This year's Fruit of the Womb Service with Prophet TB Joshua was incredible, as there was an overflow crowd outside the main church. The sermon of the service “There is a way out” proved that there is indeed a way out when God is involved in your situation and indeed there was a way out.

One thing that caught my attention was the muffler, which Prophet TB Joshua brought out for the service, wearing it around his neck. It was not just a muffler but a “Mantle”. As the “Mantle” was being touched and passed, I saw the manifestation of the Holy Spirit as fibroids came out of some women while others vomited various poisonous substances which seemed to be the cause of their problems.

“Now take back your circumstance from the hands of evil. Now there is a way out. Your prayers right from your church have been answered”, said Prophet TB Joshua.

Prophet TB Joshua said, “Who knows what would have happened to you if your prayers for children had been answered”.

The Prophet further cited Hannah in the Bible, 1 Samuel 1:11, as a case study; “If Hannah had had a baby earlier, who knows what would have happened to Hannah later. This is why we are here today, to make it happen. The way out has come”.

Thank God for using Prophet TB Joshua to do this great work and to break the chain of barrenness in the lives of families in this generation and those to come.