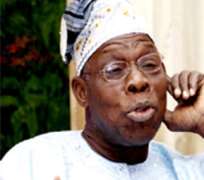 At the same time, he dismissed fears of any election annulment as it happened in 1993, under the Babangida administration, when the election of Moshood Kashimawo Abiola was annulled by the military junta.

Obasanjo spoke in Abeokuta, Ogun state today, when he met a group that styles itself, Concerned Citizens of Nigeria.

According to the former Nigerian leader, there will never be a repeat of what happened in the country in 1993 after the Presidential election.

Obasanjo declared that he has confidence in the All Progressives Congress,APC Presidential candidate, General Muhammed Buhari because he was a trained military officer.

The group called on the former President to intervene in the country's looming political crisis before matters degenerate.

'We have come to express our deep concern over series of dangerous political miscalculations currently going on under Jonathan administration.

'We are afraid that crisis is seriously looming and it is like another June 12 crisis is on the way and it may be very tragic for the country. We want you to as a matter of urgency intervene into the matter before it is too late sir,' the group opined.

In his response,the former President allayed their anxieties, saying that the 2015 election will never be like the June 1993 election.

'You need not to worry about anything. There can never be any June 12 annulment again. Buhari is not Abiola, he is a trained and highly intelligent soldier.

'Oyegun is not Anenih, Osinbajo is not Kingibe. Jega is not Nwosu, Jonathan is not IBB and this time around, Obasanjo will not support any interim government.

'Obasanjo will rather support a free, fair and credible election.' - News.