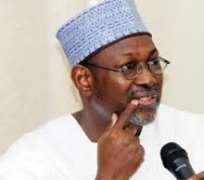 (Democracy & Civil liberties, Onitsha Nigeria, 24th April 2015)-The leadership of International Society for Civil Liberties & the Rule of Law is in receipt of a letter addressed to our Board Chairman by the Chairman of the Independent National Electoral Commission. The two-page letter, dated 17th February 2015 and signed by Prof Mohammed J. Kuna (SA to INEC Chairman) on behalf of Chairman of INEC, Prof Attahiru M. Jega; was in response to our earlier letter addressed to the Commission, the SGF, the DG of DSS and the Chief of Defense Staff, dated 10th February 2015, which contained 19 demands/recommendations to INEC and 9 demands/recommendations to the Federal Government and its Service Chiefs concerning our position/recommendations for 2015 polls' security and administrative conducts. The INEC's letter under reference is hereby attached for public and other electoral stakeholders' perusal. This is in furtherance of our openness and public accountability.

The INEC Chairman had in his letter to Intersociety faulted our position on its handling of the National Register of Voters; declaring our position/recommendation as fundamentally flawed based on our inability to avail ourselves of necessary information on Voters' Register posted on its website. Our concern was fundamentally on timing and suddenness of the referenced deletion, which took place within the last two months of 2014. We saw this as a repetition of the botched lopsided creation of 30, 427 polling units by INEC in August of 2014. When compared with official information on the state of the Nigeria's National Register of Voters released to Nigerians by the INEC Chairman during his Press Conference of 10th September 2014, we have every reason to query the Commission on our suspicion that ethno-religious and political influences were behind the sudden exercise.

Admitted that we omitted looking at official information posted on INEC's website on our visits to its website, concerning how and reasons why the Commission carried out the exercise; but INEC's public information management in Nigeria is fundamentally elitist and under armchair influences. In the recent findings by the US based National Republican Institute and the Democratic Institute, INEC was heavily blamed for inadequate information and its dissemination concerning its various activities. The major wheel driving the activities of electoral commissions during electioneering is adequate public information dissemination concerning its activities. Such information must be designed to reach the target audiences and the target audiences in general electioneering are not the elites or academia, but the general or un-attentive public, which include farmers, artisans, rural dwellers, petty traders and commercial transport operators.

It is not enough for INEC to post information on its website and go home and air-conditioned; thinking that every Nigerian is ICT literate and compliant including people living in the country's rural areas. If a lot of prominent Nigerians including some public office seekers and holders can still be classified as “ICT illiterates”, what can INEC tell Nigerians about tens of millions of others who are still thousands of miles away from ICT age and application including religious adherents who see it as a taboo because of its alleged link with western culture? Can INEC tell Nigerians and other global watchers of events in the country how many Nigerian citizens that visit their website on daily basis? By the way, how many Nigerians have access to internet and what is internet density in Nigeria particularly in the Northwest and the Northeast?

Using the case of Anambra State as an example, in the 2011 voters' registration; a total of 2,011, 764 people was registered (raw and unprocessed figure). Under Consolidation, the figure came down to 1, 811, 536 RVs; after which it went through AFIS resulting in 1, 784, 536 RVs. A total of 27, 012 registered voters were identified then as multiple registrants. When the figure of 1, 784, 536 RVs went through Post Business Rules possibly in 2014, a total of 55, 306 RVs were removed or deleted. The Post Business Rules, according to INEC tends to weed out RVs with incomplete fingerprints by denying them PVCs while AFIS identify and weed out multiple RVs.

Finally, while the foregoing struggled unsatisfactorily to offer reasons as per the referenced deletion, the issue of indiscriminate registration of under-age voters and issuance of PVCs to them further compounds and complicates the issues complained of. It is correct to say that the Northwest and the Northeast Nigeria parade the highest number of under-age voters in the country till date. This is more so when the four processes of managing the National Register of Voters only target multiple registrants, registrants with incomplete fingerprints and INEC's data duplicates and fundamentally shield under-age voters particularly in the Northwest and the Northeast.

The INEC Chairman's letter to Intersociety also went dumb by failing to respond to the issue of gross lopsidedness in the geopolitical PVCs distribution across the country. Its excuse on Mr. Muhammadu Buhari's school certificate issue, which the Commission hinges on ongoing court processes, is not excusable. This is more so when despite several court processes concerning whether or not to hold polls as earlier fixed, he defied the court processes and announced a shift in the dates of the referenced polls.

All in all, we commend the leadership of INEC for responding promptly to our all important letter under reference, despite the skeletal nature of the Commission's letter referenced: INEC/CH/GC/073/1. This is a clear departure from the attitude of the Nigerian public office holders who hardly respond to several public interest letters addressed to them or their offices no matter the timing, substance or otherwise so contained.