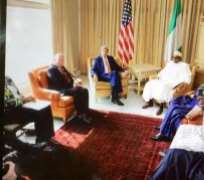 Inviting foreign consultants, foreign Governments and foreign troops and their intrigues openly into Nigeria in this election season is a recipe for disaster. These foreign interests in Nigeria does not look good from all the angles at this time, because of volatile, quick to anger, unrestrained fragile illiterate population all over Nigeria while Nigeria internal security is strained to limit.

Nigerians being so gullible will look at this as a good affirmation of their party and country, but it makes Nigeria look like a banana Republic and Nigeria prestige is already downgraded in the eyes of serious minded people of this world by these actions. No self respecting country can openly invite foreigners to come and conduct their national election openly.

Nigerians and Africans have no shame and it means that with all the educated elites and local consulting firms in Nigeria, none among 170 million Nigerians is smart enough to conduct Nigeria election. Nigerians by these actions have just told the world is a nation of dumb people and it shows. The are many ways a foreigner can help Nigeria, but not running around Nigeria campaigning with corrupt politicians with spreadsheets in their looted private jets, tinted jeeps and vans all over Nigeria during campaign seasons. What a shame for this country.

For me in African level, Republican party policy towards Africa is much more better and beneficial to Africans than Democratic party policy towards Africa at least in the last 20 years. The election in Nigeria will be determined by Nigerians in their own ways. Foreign interference has always been the reasons for most of the conflicts in Africa. As things are looking now in Nigeria and its election, foreign interference has taken hold in Nigeria from USA, Britain, AU, ECOWAS, Chad, Niger Republic, Cameroon etc. with the multi national force coming into Nigeria to fight Boko Haram and this a recipe for disaster for Africa. When these foreign interest start the problem 170 Nigerians and millions of Africans will suffer the consequences. Nigeria interest counts more than any foreign interest.

"Thanks to the reporting of Adam Kredo, we now know that it was something more nefarious. David Axelrod is Mr. Buhari s lobbyist and in this administration you can buy the presidency of Africa's most populous nation. According to the Washington Free Beacon report, Mr. Axelrod's firm, AKPD, was employed by Mr. Buhari's APC party as recently as December 2014. The timing of Mr. Kerry's visit the next month within in that context puts a shorter lifespan on the Jonathan presidency. President Jonathan must now fight without firm footing against Boko Haram, his political opponents, U.S. diplomats and their lobbyists. He has about a month to make something happen. "unquote. This article is written by Nicholas Hanlon, Chief Africa Analyst at the Washington based Center for Security Policy for the WASHINGTON Times a Republican leaning National Newspaper.

" President Jonathan must now fight without firm footing against Boko Haram, his political opponents, U.S. diplomats and their lobbyists. He has about a month to make something happen. At such a crossroad, it's important to have a good measure of who Mr. Buhari is. The fundamental political difference between Mr. Buhari's group and those who would become Boko Haram back in 2000 was a factional split over who could best purify the Muslim north of political corruption and enforce the best interpretation of shariah law.

In the year 2000, Mr. Buhari 's political colleagues were debating whether they could accept a moderate enforcement of shariah law in the North. “I can die for the cause of Islam. If necessary, we are prepared to fight another civil war. We cannot be blackmailed into killing Sharia” – Muhammadou Buhari, 2000 Freedom House." unquote Written by Republican leaning Major News paper the Washington Times. This article is written by Nicholas Hanlon, Chief Africa Analyst at the Washington based Center for Security Policy for the WASHINGTON Times.

Comparisons for me personally, Republican party policy towards Africa is much more better and beneficial to Africans that Democratic party policy towards Africa at least in the last 20 years. Let me give some recent examples of the different policies of these two American political parties policy towards black sub-Saharan Africa. Examples, during the civil war in Liberia and Sierra Leone, the Republican President Bush after many world effort to end the war failed , sent American troops and war ships to the shores of Liberia and Sierra Leone to stop the war and the leaders of that war like Charles Taylor and his group are presently in Prison or awaiting trial in court.

The long civil war in Sudan ended because a Republican Party President Bush seriously started and supported the peace process and peace effort has held. During the HIV/AIDS epidemic and the world was helpless and Africa was and is still most affected by HIV/AIDS epidemic. It was the Republican President Bush that allocated almost 20 Billion dollars to fight this disease cure and prevention, and the result has been huge decline and free or affordable HIV/AIDS medication for average African with the disease.

In contrast with the Democrats , The Rwanda and Burundi Genocide when more than one million people were killed and another one million suffered dislocation , wounded and traumatized . No one came to help them for over one year while the massacre and genocide was happening was under a Democratic President Clinton. For five years now, The Boko Haram Islamic insurgency taking place in Nigeria and have spread to Chad, Niger and Cameroon have intensified under a Democratic President Obama; and yet the Government under Democrats have refused to approve supply of weapons and resources to help Nigeria and these countries to fight the insurgency.

For me as an African, security is very important for future development and advancement of Africa. I have always questioned people who said that Africa will benefit from President Obama administration and Democratic Party, and I have always given them the above examples between Democrats and Republican party policy towards Africa. President Obama is a nice man, but African have really not benefited from his administration like some people made us believe and I want them to point out one example of real commitment to Africa apart from rhetoric's and paper proposals that have not happened and will never happened.

As we speak Today the is no single State Democrats control in the South and just few in mid west. For example Texas used to be a staunch Democratic State but Today is almost 100 percent Republican State. Democrats used to control all 25 State of the Southern and Midwestern States. Today they have none-zilch-zero in South.

This is how Republican party by slow and steady work have taken over every thing and have total control of both houses (Senate and House of Representative) and 80 percent control of all elected offices in America now.Republicans will win the Presidency in 2016.

I am sorry, Democratic party do not know how to play the ground games. President Obama to his credit came in and gave Democrats some lifeline and boost for 8 years and that's it. Democratic party are experts in playing tribal, ethnic,race, gender and sympathy card game. I am happy that Republican party is winning the ground game and Republican party will win the next presidential election when you look at the map -see the link to the map of Republican red states and Democratic blue states