On February 14th We Stand 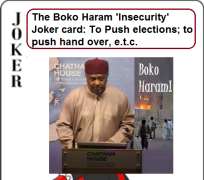 Through the harrowing and daunting five years of continuous Boko Haram successful onslaught against Nigeria, leading to thousands of civilians, soldiers and other security personnel deaths and the loss of swaths of our territory, we have been looking for our National Security Adviser. But NSA Sambo Dasuki has been nowhere to be found.

Suddenly as the presidential elections approached, we spotted our NSA in England at the Chatham house.

Nigeria is bigger than Goodluck Jonathan alone.
Nigeria refuses to be held back or delayed because of the desperate political ambitions of a single person.

The antics are rejected at arrival. On February 14th Nigeria stands. We reject their tommyrot. We reject a postponement of the presidential elections. It is time to make the decision and Nigerians are ready.

The security state or state of insecurity did not suddenly arise but has persisted unabated for the entire five years of the Jonathan government. The logic in a delay to “secure the northeast” comes late and is illogical. We have witnessed Boko Haram capturing territory in the northeast and then being pushed back and then being allowed (with dismantling of the Joint Task Force and phony cease fires) to again flourish and recapture the same terrain. It has remained a never ending cycle under this administration.

A delay on this premise may well be infinitesimal based on the record of this administration in handling security, preparing for elections and indeed all other government duties.

The NSA dangled proposition to push the elections so as to 'secure' the northeast is senseless and dead on arrival. Thousands of troops deployed to the Ekiti elections and deployed to secure Maiduguri upon the president's visit should again be deployed to parts of Borno and Adamawa state where elections WILL HOLD on February 14th.

The Boko Haram 'insecurity' joker card that was first created and used to secure a victory in 2011 (with the suspicious Abuja Independence day bombing), and has been sustained by this administration in violence on the ground and as invigorated by promoted fanatic preachers for use as they now are — to attempt to postpone the unfavorable (for the ruling party) elections and the same card that will again be presented to prevent a handover of power is 'declared cursed,' borrowing a phrase from Bishop Oyedepo's books.

We urge Nigerians to stand up for justice.
We urge all Nigerians to resist a forced and bribed shift in the poll date.

Nigeria is ready for CHANGE!
On February 14th we stand!
Dr. Peregrino Brimah; http://ENDS.ng [Every Nigerian Do Something] Email: [email protected] Twitter: @EveryNigerian