Boko Haram taking the shine off my achievements -Jonathan 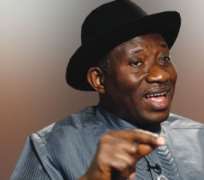 President Goodluck Jonathan on Thursday regretted that members of the Boko Haram sect have been diverting people's attention from his administration's numerous achievements with their violent activities in parts of the country.

He however assured Nigerians that the Federal Government would soon end the insurgency.

Jonathan spoke when he paid a courtesy visit to the Emir of Bauchi, Alhaji Rilwan Adamu. The President was in the state in continuation of the Peoples Democratic Party's presidential rallies.

He said his administration had worked hard to justify the massive support he got from the people during the 2011 general elections.

He promised that if re-elected, he would work with Bauchi leaders to develop the mineral resources in the state as part of measures to diversify the country's economy away from crude oil.

The President said, 'When we moved round in 2011, we got massive support from you and since then, we have been working hard to justify your support. Insha Allahu, we will also succeed this time.

'The unfortunate Boko Haram excesses are taking attention away from our numerous  achievements.

'Everybody wants security, everybody wants to be safe and to be able to move freely. I am therefore assuring you that we will bring the situation to a reasonable degree and will eventually end it very soon.

'We have worked very hard to improve agriculture and ended decades of fertilizer scam. We want Nigerian farmers to crop three times a year.

'We are thinking of different options to fully diversify our economy due to the fall in the global price of oil and Bauchi is one of the states we will tap into its solid mineral potentials.'

The emir commended government's efforts aimed at ending insurgency and rescuing the over 200 abducted Chibok girls.

He also lauded the present administration's commitment to free and fair elections.

Ahead of the general elections, the monarch urged Jonathan to bear in mind that only God gives power to people anytime He desires.

He said, 'Only God gives power anytime He wishes. I urge you and other candidates for different offices to bear this in mind in your campaigns.

'Politicians should work towards making Nigeria a stronger regional and sub-regional force.

'I encourage and commend you on the efforts you are making on the issue of insecurity and we are hoping and praying that our Chibok girls will be out soon.

'We also appreciate your expressed commitment to free and fair elections and the signing of the Abuja peace accord as it will encourage our people to embrace peace instead of acrimony.'

Vice President Namadi Sambo; National Chairman of the PDP, Adamu Muazu; and the Minister of the Federal Capital Territory, Bala Mohammed, among others accompanied Jonathan to the palace. Punch