Exclusive: Al Jazeera Travels To Eastern DRC Hills Ahead Of Offensive Against FDLR Rebels By UN And Congolese Government 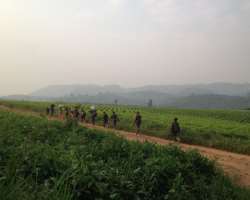 • FDLR says it wants political dialogue. UN says it's not cooperating with the surrender and some of its fighters are preparing for battle.

Al Jazeera's Malcolm Webb travelled to the remote hills in the East of the Democratic Republic of Congo and spoke with the Democratic Forces for the Liberation of Rwanda (FDLR), the Rwandan rebel fighters who have been based there for more than 20 years. The Congolese Government and the UN say they are about to launch an offensive against them, with a deadline for them to surrender passed on 2 January 2015.

The UN says FDLR rebels are putting their families at risk by not surrendering ahead of the military operation in eastern DRC. "They tell us we are criminals,” FDLR spokesperson La Forge Fils Bazeye tells Al Jazeera. "Let them point out the criminals among us and we will sideline them. But what about the Rwandan Army's massacres of our people in Rwanda and Congo? The solution to the Rwandan problem is truth and reconciliation."

Government soldiers told Al Jazeera they were waiting for the orders to go ahead with the offensive against the rebels, but the fight will be difficult because of the steep terrain in the area.

In Rwanda, Louise Mushikiwabo, Minister of Foreign Affairs, tells Al Jazeera: "The FDLR is not a political organisation. It's a bunch of thugs who committed genocide, who have kept civilians, their families, hostage. That should be very clear, that nobody should even think that there is any kind of political claim that this group can have.”