Politicians hardly keep to their words, they're liars - Adeboye 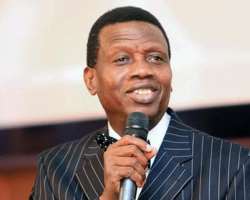 The General Overseer of Redeemed Christian Church of God, Pastor Enoch â€ŽAdeboye, on Friday said he does not trust politicians because they don’t keep to their words, and in most cases hardly fulfil their promises.

Adeboye spoke while in â€ŽObafemi Awolowo University, Ile-Ife, Osun State, for  a two-day interdenominational prayer justified his position by giving an illustration with the story of three travellers - an Indian, a Jew and a politician.

He narrated that while on their journey, the three travellers had some challenges, and went to a farmer for help but the farmer said he could only accommodate two.

According to him, the Indian volunteered to sleep in the barn but returned a few minutes later that there was a cow there.

The Indian, he said can't sleep there because cows are gods, worshipped in his country.

Adeboye said the Jew also came back complaining that the pig inside where he was placed was unclean.

The GO added that the politician volunteered to go and sleep among the pigs.

But rather than for the politician to come back complaining, Adeboye said, it was the pig and cow that came knocking that the politician be sent away because he had promised to make the environment, including the barn, conducive with air-conditioner.

'I don't trust politicians; politicians are liars. They don't fulfil most of their promises. A politician can tell you that they will give all of you (students) chicken each, which we all know it is impossible,' Adeboye said.

The RCCG general overseer, whose one of his pastors, Prof. Yemi Osinbajo (SAN), is the vice-presidential candidate for the All Progressives Congress, asked Nigerian to stop worrying themselves about who would emerge winner in the next election.

He explained that God is a 'master planner,' who already planned the leadership development of Nigeria.

Vice-Chancellor of OAU, Prof. Bamitale Omole, commended Adeboye for his yearly presence in the university, saying his divine intervention were having positive impacts in the school.

'We appreciate the love of Pastor Adeboye. With God and his presence last year, we had no calamities and also emerged as the best university in Nigeria. I urge students to be prayerful and cautious of what they do as God will continue to protect us,' he added.