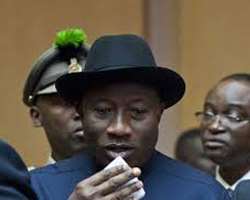 President Goodluck Jonathan has said there are moles among the personnel of the Nigerian military betraying the nation in the current war against insurgency, directing that any personnel suspected to be such an agent should be redeployed immediately.

'It is the situation in all sectors of government all over the world, so it is the duty of the officers to detect those who are working against and those who are committed to the country early enough. The officers must be smart to quickly detect those who will betray others, a betrayal that may lead to massive death of officers when they are in operations.'

Jonathan spoke Wednesday in Abuja at the commissioning of the new National Cenotaph at the military cemetery in Abuja as part of activities to mark the 2015 Armed Forces Remembrance Day.

The President, who was apparently reacting to the reports among security circles that the Boko Haram group gets to know of the tactical plan of the Nigerian army ahead of time, hence the seeming successes the group records against the military, said it is not uncommon for a traitor to exist among a group, but it is the responsibility of the leadership to fish out those whose evidence against them that they are culpable is incontrovertible.

'I am not saying there are no bad eggs among us, there are definitely a few cases where some people exhibit behaviour that is at variance with the norm, and it is not expected of them to do so. If we are able to filter among ourselves and we are able to identify such people, they may be deployed to other places. I'm not advocating for the retirement of people, except it becomes very clear that such an officer has committed an offence that requires this, but soldiers must be trusted people. Soldiers must not betray themselves, if any soldier is suspected to have this kind of inclination, the best thing is to redeploy that person away from the position to postings where he will not be an enemy to the state and his colleagues,' Jonathan said.

While commending the resilience and commitment to serve the nation and hinting on the possibility of erecting a museum where photographs of soldiers that have paid the supreme sacrifice would be displayed for the future generation, President Jonathan said the Cenotaphs 'is a clear testimony the government would always remember those who served this country, especially the military and the paramilitary officers that have to be awake for us to sleep. They are in the sun, the bushes and all for us to live in peace.'

The Chief of Defence Staff (CDS), Air Chief Marshal Alex Badeh, said the event marked the erection of a commemorative monument that serves 'as a symbol of the deep gratitude of the Federal Government and the people of Nigeria and the armed forces of Nigeria in particular for the sacrifices of our men and women in uniform.'

According to Badeh, 'It is in recognition of the gallantry of our military men and women that this Cenotaph has been erected to dedicated to the memories of all personnel who paid or that will pay the supreme price for the unity of this country'.

The President also decorated 10 officers with the Operation Zoman Lafiya Medal of Merit for gallantry and committed service to the nation. - Guardian.