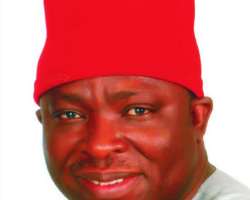 Chief Victor Umeh is no stranger to the politics of Anambra state and Nigeria in general; over the years, he has demonstrated a brilliant ability to stand firm in the rescue of the Igbo nation from the hands of political jobbers and misfits whose major interest in politics is the acquisition of lucre while offering poor representation.

As we get set for the forthcoming general election, the people of Anambra Central Senatorial Zone are once again faced with the daunting option of electing a man of strong moral and political fibre to be their voice at the Senate of the Federal Republic. Interestingly, we have an array of individuals stepping forward to be counted in the race to the hallowed chambers of the senate. Where then is our choice and what are the qualities we should be looking out for in electing an individual that would speak for us?

We have Chief Victor Umeh, Ohamadike Ndi Igbo. At the risk of sounding rather too immodest, I make bold to say that Chief Umeh towers greatly above every other person asking for our votes come February, 2015. It is pertinent at this juncture to remind the people of Anambra Central to be mindful of where we are coming from, and where we are headed. We must be quick to jettison the politics of yesteryears that had in the recent past denied us of the much touted dividends of democracy.

Amongst those clamouring to be elected by us as the peoples' senator, who could genuinely claim that he/she has fought to restore the apparently battered image of the Igbo person? This question ought to guide us in making this choice come February, 2015. Over the years, can we the people of Anambra Central proudly point at any developmental project attracted to our Zone by those who we had sent to the Senate to be our voice? If your answer is no, just like mine, then do not be faint-hearted for finally, Ohamadike has stepped forward!

As a rugged fighter known for deploying every vivid constitutional means in championing the Igbo cause, Chief Umeh comes with a dazzling political resume. Apart from the late Dim Chukwuemeka Odimegwu Ojukwu, it is safe to say that no other figure has fought for the upliftment of the Igbo cause more than Chief Umeh since the commencement of this present democracy. The successes being attributed to the immediate past governor of Anambra state wouldn't have been possible if not for the political sagacity and acumen of Chief Umeh. The All Progressives Grand Alliance, APGA would have been buried and forgotten if not for the doggedness and brilliance of Ohamadike. The list is endless, simply endless.

Moving forward, this is the time to ask hard questions. This is a period that has presented us with the golden opportunity to look back at our history with a view to making very logical corrections. The forthcoming general election is another window of opportunity for the good people of Anambra Central senatorial zone to call political buccaneers to order; we must show them the red card as punishment for their total neglect of the Igbo cause, while lining their pockets and boasting of building “VIP toilets”. Pure shame!

What we need now is a collection of cerebral individuals who have as their calling, the eternal pursuit of the revamping of the Igbo nation. We need politicians who do not just see politics as a vehicle of primitive acquisition, rather, as a call to duty-a divine acceptance of the need to offer selfless public service. It is on good record that Chief Victor Umeh has demonstrated severally his ability to be a voice for the voiceless and a firm believer in the timeless beauty of democracy.

In this 21st century, our major preoccupation should be with drafting brilliant citizens who have the love of God and man in them to represent us. We must reject henceforth, the age-long practice of accepting the warped intrusion of Godfathers in our political space; people who are more interested in rubbishing the wish of the people at the altar of greed and sheer wickedness. This is a time of soul-searching; a time we must demonstrate our God-given ability to think and make choices that would affect us for good. The adage that “if you don't say I am, nobody will say thou art” should be the lamp at our feet, guiding us towards making the right choice come February 14th, 2015.

My good people of Anambra Central senatorial zone, let us make haste to stand behind Chief Umeh, a man who is clearly ahead of his time in politics, a man who has been ordained to carry the weight of Ndi Igbo on his young shoulders. History will record that truly, Chief Victor Umeh, Ohamdike Ndi Igbo, the All Progressives Grand Alliance, APGA flag bearer came, saw, worked and excelled! This is our time to excel; this is a moment of truth, a time to send unpopular and lacklustre representation to the stinking dustbin of history (where they rightly belong). God will surely bless us all for being part of the making of history!

I salute the courage of Chief Victor Umeh, Ohamadike Ndi Igbo for stepping forward to put the smiles back on the faces of Ndi Anambra!