'Chelsea have no interest in Messi' 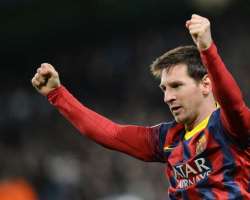 Rumours have intensified in recent days that Messi has become increasingly unhappy with life under Barca head coach Luis Enrique.

Subsequent reports in the British media claimed Chelsea were willing to meet Messi's release clause in an audacious bid to bring him to the Premier League, but Holland insists there are no plans afoot to sign the 27-year-old.

'I think he [manager Jose Mourinho] has made it quite clear that in this window his expectation is that nobody comes and nobody goes.

'I recall this time last year he said the same thing, but a couple of things happened that meant we had to be reactive.Sometimes you just have to react.

'The hope is that nobody leaves and nobody comes, we're happy with what we've got.'

Mourinho missed Friday's news conference following his Football Association misconduct charge for claiming there was a 'clear campaign' against his Chelsea side to influence referees after Anthony Taylor adjudged CescFabregas to have dived during the 1-1 Premier League draw with Southampton last month. Agency report