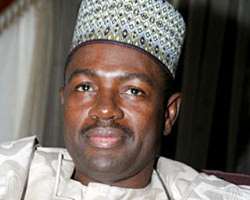 The Nasarawa State chapter of All Progressives Grand Alliance Nasarawa on Saturday announced the immediate past Minister of Information, Mr. Labaran Maku as its governorship candidate for the 2015 election.

The Chairman of the party in the state, Ifeanyi Amakor, who presented Maku, along with his running mate, Ibrahim Abu, amid tight security, to state and local government party executives said the party chose Maku in the best interest of the party and the people of the state.

'I want to use this opportunity to unveil Maku as our candidate for APGA for the governorship in Nasarawa State and to clear every rumour going round the clock that Maku is not our candidate, let me tell you, we don't have two candidates in the state; the only candidate we have is Maku,' he said.

He asked party members to remain resolute in their quest to win the governorship contest in the February, 28 election.

Responding shortly after his presentation, Maku pledged that if given the mandate, he would create massive youth empowerment and job opportunities to enhance the economy and bring about peaceful co-existence in the state.