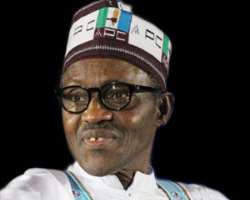 Renowned Catholic Priest, Rev. Fr. Ejike Mbaka, has offered prayers for the All Progressives Congress candidate, Maj.Gen Muhammadu Buhari (retd.) to  emerge the winner of the presidential election next month.

Mbaka, who heads the popular Catholic Adoration Centre in Enugu, said this in his New Year sermon titled 'From Good luck to Bad luck,' while addressing thousands of parishioners on Thursday night in Emene, Enugu State.

He urged all well-meaning Nigerians to vote for Buhari on February 14.

According to the cleric, Jonathan has disappointed Nigerians and cannot deliver the dividends of democracy to the people.

Mbaka subsequently knelt down in front of the altar, cried and asked God to give Nigeria a good leader and not Jonathan. He used the opportunity to beg Nigerians to vote wisely in the forthcoming elections.

'I love President Goodluck Jonathan and I used to be his ardent fan, but I want good for my people and that's why I want Nigerians to vote out Goodluck Jonathan and vote General Muhammad Buhari. I don't care if Buhari is a Muslim and from the North; all I care about is that Buhari can save Nigeria,” Mbaka stated.

It could be recalled that the same Mbaka had recently endorsed Jonathan's re-election bid when the Deputy Senate President, Ike Ekweremadu, had taken Jonathan's wife, Patience, to Mbaka, where the cleric said he would pray for Jonathan's victory.

However, after prayers, Mbaka said the sign he received from God was that Jonathan was not fit to rule the nation anymore.

Mbaka further explained that one of the reasons Jonathan is no longer fit to rule Nigeria for the next four years was the high level of insecurity which the President had failed to address as well as corruption in the country.

He said it was unfortunate that the over 200 Chibok girls who were abducted by terrorists over 200 days ago had not been rescued despite series of promises made by Jonathan.

He further urged the Federal Government to account for the missing $20bn and stop insurgency in the country.

Mbaka maintained that Buhari could not Islamise Nigeria as being rumoured in some circles.

He said he had never met the APC candidate but urged Nigerians not to forget that Buhari fought corruption to a standstill during his administration between December 1983 and August 1985.