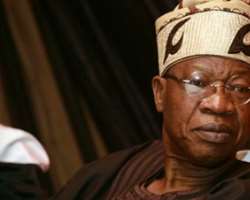 The All Progressives Congress (APC) has thrown jabs to President Goodluck Jonathan for his inability to fight the two main challenges facing the country, corruption and security, despite having six years to do so.

In a statement the party issued in Lagos on Friday by its National Publicity Secretary, Alhaji Lai Mohammed, it said, 'The President has finally admitted that the two main challenges facing the country are corruption and insecurity, and seems to be telling Nigerians to give him more time to tackle the problems. But the truth is that he lacks the capacity to fight and defeat these challenges, whether in six or 10 years.

'A President who has spent the last six years trying to diagnose the main problems facing the country will apparently need another four years to plan how to tackle the challenges. By then, all of us would have been buried under the rubble of corruption and our country would have been decimated by insecurity. It is therefore time for Nigerians to vote in a President who will hit the ground running, a President who will tackle the problems of corruption and insecurity headlong, without giving excuses for failure.”

APC said a corrupt government can never fight corruption, hence it will be futile to expect the Jonathan Administration to take on and defeat corruption, having been populated by profiteering personalities.

'Mr. President said he wants to put in place the institutions to tackle corruption before taking on the canker worm that has almost destroyed the fabric of our society. Pray, whatever happened to the Economic and Financial Crimes Commission (EFCC) and the Independent Corrupt Practices and Other Related Offences Commission (ICPC)? Were they not institutions specifically created for the purpose of tackling corruption, but which the Jonathan Administration chose to castrate?

'There is no better way to say this: President Jonathan lacks the political will to tackle corruption, and he will not tackle it if he spends 60 years in office,' the party said.

According to APC, the President missed a golden opportunity to take on and defeat the Boko Haram insurgency in its early stages, and instead chose to engage in shadowboxing. When he was not blaming everyone but his Administration for the insurgency, he was playing primordial politics with it, to such an extent that the terrorists became strengthened and emboldened to strike at times and places of their own choosing.

'Had the President learnt a lesson or two from the crushing defeat of the Maitatsine sect by Gen. Muhammadu Buhari, which signalled the death knell of the sect that is a precursor of Boko Haram, the insurgency that is daily claiming the lives of our citizens would have been defeated early on.

'It is too late in the day for President Jonathan to engage in sophistry over the twin evil of corruption and insecurity. He has reached the limit of his capacity to tackle these challenges and it is time to allow those with necessary political will and capacity to take on the challenges before they crush the country,' APC said.