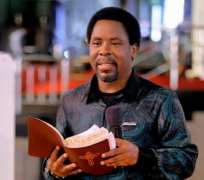 In March 2014, Prophet T.B. Joshua granted a rare interview to Nigeria's New Telegraph newspaper in which he made several revealing statements concerning the February 2015 elections. With the date of elections steadily drawing closer and tensions arising around the nation, the clerics words appear even more pertinent now than they did nine months ago.

Here is the transcript of the interview:
General Overseer of The Synagogue Church Of All Nations (SCOAN), Prophet T B Joshua, warns politicians not to derail the nation's democracy. He spoke with TAI ANYANWU.

There are so many troubles in Nigeria today - problems of insecurity, threats to national unity, political manoeuvrings by rival political parties. What are your comments concerning these troubled times in the country?

It is a normal thing for a country that has a bright future, God's promise. A bright future always attracts persecution, condemnation and enemies who realise that the future is bright - you see a lot of pressure and threats. The country is on the path to greatness; it will compete with any Western nation in the future and the Western nations know that Nigeria is going to be a giant. That is why there support in these trying times is needed. There is no country that has not passed through this.

All the countries that have become great today all passed through turbulence that nearly consumed them. How we manage the situation matters. If we don't manage it well, we will not witness the greatness. It is not that the greatness would not come but that would not be for our generation. The greatness will still come but for the coming generation.

With the turbulence being experienced in some states of the federation and the election around the corner next year, how do you think this will play out?

Elections will not happen in some states because of the frequent attacks. This could affect between three to four states. The states would be a no-go area due to violence and elections would not take place in those states unless we move closer to God. We must intensify our prayers. This is what God has showed me and you can imagine what would happen if elections don't hold in those states. It would have a great implication for our democracy.

How should we manage it?
We should not allow the politicians to politicise all the areas of our lives. For example if you want to enjoy anything, you have to be part of their party. For example, unless you are part of their party, you cannot benefit from things that should be available to you as a citizen. Look at electricity, health etc - they have politicised everything. Religion has been politicised. Even Christianity has been politicised. They go to church; the pulpit is where they campaign now.

Now they go to churches and mosques to bomb them. These are people in church who had gone to pray for themselves. Must everybody become a politician? How we handle the situation at hand now matters. If the situation is not well managed, we will find ourselves postponing the great Nigeria. In other words, we would not witness it but it would be witnessed by our children.

Don't let us politicise every area of our lives. Let us carefully play our politics with keen decency because 2015 matters in the history of Nigeria. It is either we cross the bridge successfully or it collapses. A good Nigerian that wants this greatness should be able to pay whatever proper price that is needed to be paid to make this dream of a great Nigeria possible. If your being in politics will make this greatness come, then join. From now to 2015 is a very important period in the history of Nigeria and if we don't manage the situation well, our democracy would be rubbished.

What do you mean by 'our democracy would be rubbished'?

A situation where there would be lawlessness in the sense that the law would not be capable of guiding us because of the pros (for) and cons (against) as contained in the law. That would now take so much time which would lead Nigeria to a discussion table. Where would you and I be at that time?

With the situation in the country today and the agitation on 2015, what advice do you have for politicians not to create more tension in the polity and what is the way out?