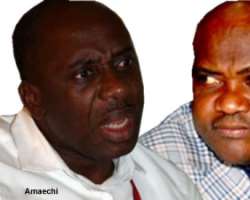 A former Minister of State for Education and the governorship candidate of the Peoples Democratic Party (PDP) in Rivers State, Nyesom Wike, has accused the Rivers State Governor, Rotimi Amaechi, of spending N30bn to fund the presidential campaign of the All Progressives Congress (APC).

Wike explained that the development had made it impossible for the state government to pay workers' salaries, adding that the governor was using state resources to fund the APC with the hope that he would be picked as the running mate to the APC presidential candidate, Muhammadu Buhari.

The PDP governorship candidate pointed out that Amaechi was being deceived by the leadership of the APC to continue to fund the party, adding that the APC leadership had never been interested in selecting the governor as Buhari's running mate.

Speaking during his thank-you visit to Ikwerre Local Government Area on Thursday, Wike noted that the future of Nigerians was in the PDP and not the APC.

'Do you know why workers' salaries have not been paid? Amaechi spent N30bn in funding the presidential campaign of the APC. They (the APC leadership) allowed him to spend the money and later, they called him mugu (fool).

'They (the APC leadership) said we will not make this 'boy' who does not respect the President (Goodluck Jonathan) the vice president. We should know that our future is in the PDP and not the APC,' Wike stressed.

The former minister also decried the statement credited to the APC governorship candidate in the state, Dr. Dakuku Peterside, that he (Peterside) would build on Amaechi legacy.

According to him, some of the governor's actions on the state judiciary, monorail project were not worth continuing as a legacy.

Reacting to Wike's allegation, the state Commissioner for Information and Communication, Mrs. Ibim Semenitari, said the PDP governorship candidate spoke without fact, even as she challenged him to show any proof that Amaechi was funding the APC.

'It is unbelievable that a man who wants to be the governor of this state can make such an unbelievable statement without any proof. We challenge him (Wike) to show proof that Governor Amaechi spent N30bn to fund the APC campaign.'