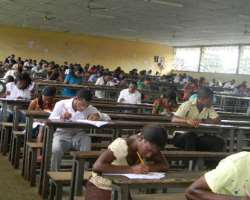 Another high rate of failure recorded in the last West African Senior School Certificate Examination stands as an undeniable evidence of the continued dip in the standard of education available in Nigerian schools in recent times. The results released last week indicate that only 29.37 per cent - or 72,522 candidates - of the 246,853 that sat for the examination obtained the mandatory five credits, including English and Mathematics, necessary for admission to Nigerian universities. Lamentably, it is a ringing indictment of what is now left of the once-highly-rated Nigerian educational system.

Although touted as a better performance compared to last year's, which recorded a 26.97 percentage pass at credit level (inclusive of English and Mathematics), it still offers very little to cheer when over 70 per cent of candidates who sit for an examination come out short of the minimum acceptable level of passes. Besides, when considered in absolute figures, the 72,522 that passed this year's November/December examination are still numerically inferior to the 80,135 candidates that excelled last year.

Again, it is important to note that the poor performance only follows a trend that has been established in the past few years, which has seen the percentage of passes falling consistently under the 40 per cent mark. In the May/June version of the examination for this year, for instance, 31.28 per cent of candidates passed the examination, far below the 38.81 and 36.57 recorded in 2012 and 2013 respectively. These statistics are certainly not a good advertisement for the standard of education in the country; the government and indeed all the stakeholders have a task ahead of them if they are interested in bucking the trend.

Partly responsible for the mass failure is the quality of teaching at the schools, which, in itself, is a by-product of the substandard quality of teachers employed to impart knowledge to the students. Two years ago, the Executive Secretary of the Universal Basic Education Commission, Ahmed Modibbo, came up with the shocking fact that 80 per cent of teachers employed in public schools in Sokoto State lacked the basic qualifications to function in that capacity.

Alarming as it was, further investigations soon threw open a can of worms, revealing that it was a widespread phenomenon, which was only more pronounced in some states than others. The then Minister of Education, Ruqayyatu Rufai, presenting her evaluation document on education to the National Economic Council two years earlier, had put the number of unqualified teachers nationwide at 207,813, with the North-East and North-West geopolitical zones the worst hit. Nyesom Wike, then a junior minister of Education, captured the situation clearly when he said in 2011, 'If the teacher quality remains low, there is no way that we can expect better results in our external examinations, like WASC and NECO.'

But the quality of teaching is not the only factor militating against the provision of quality education. Nigerian schools have been suffering criminal neglect for decades, leading to infrastructural, moral and intellectual decay. For those who can afford it, including top government officials whose duty it is to provide all that is necessary to make the schools function well, the preference now is to send their children abroad.

While the learning environment has lost its allure, students, away from school, no longer pay attention to their learning. With both parents out in search of daily survival needs, they can no longer spare the time to provide the requisite parental supervision. Yet, it is a well-known fact that the school alone cannot provide the care and knowledge needed to excel in examinations.

This result should serve as a wake-up call to both the government and parents to act decisively to reverse the trend. If the government feels that the pressure is getting too much, there is the need to release those schools that were acquired from missionaries in the 1970s back to their original owners. It is clear to everybody that the schools were better managed by those who established them before the government's indiscretion of taking them over.

In other parts of the world, when there is a crisis of this magnitude in the education sector, it is given the attention that it requires because human capital, not natural resources, is the greatest tool for national development. The government should ensure that teachers who are not qualified are retrained to meet the required standard. Those who fail to upgrade themselves should be shown the door. Efforts should also be made to provide all the facilities necessary for learning to take place. For instance, of what use is a school without library, laboratory and standard classrooms?

Parents must also ensure that their children are properly prepared from the home front to face the challenges of secondary education. They should take time to go through their children's books and know whether they do their homework as required. Efforts, also, should be made to ensure that education at the primary school level is of high standard to be able to sustain secondary education. There is no gainsaying the fact that if the foundation is not properly laid at the primary level, it will have a damaging effect at the secondary level.