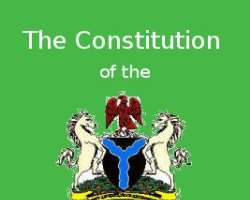 A constitution is a collection of rules and regulations that should govern a country. It spells out how political powers are to be gotten and exercised. The constitution is essential to protect the rights of the citizens and prevent arbitrary rule from public office holders and citizens from unruly behaviours. The constitution is wonderfully and beautifully crafted that it is the supreme entity of any democratic government. The only excuse for the absence of the constitution in a country is if the country is under a dictatorial rule; or under military rule; or in a case of state of emergency; and or where there is war.

The supposed custodians of the constitution are obviously the elected public office holders in government offices. These people were voted in there because the electorates believe them to be trust worthy (albeit the Nigerian case is not always so) and can protect and uphold their rights. But when these so called custodians choose to abuse, violate and desecrate the constitution, the people's trust have been betrayed and misplaced. In recent times, the political elites have found a way to circumvent the constitution and have their way. They can now easily stand the provisions of the constitution its head.

It is with absolute, utter dismay that Nigerians have come to realised that the constitutions only governs the poor and not the rich or political elites. You might have also noticed that in Nigeria, the higher your crime, the lesser your punishment and vice versa.

Should we forget so soon the battle that ensued between the Nigerian public vs President Musa Yar'dua/ Michael Aondonakaa? Where the ailing president refused to hand over to his deputy as acting president. Section 144 of the Nigerian constitution provides that 'the president or vice president shall cease to hold office if he is certify medically incapacitated'. But the AGF, Michael Aondonakaa, a learned legal practioner, said the president can rule from anywhere in the world. And I began to wonder, was the president elected in Saudi Arabia? Was he elected by the Saudis for Nigerians? Are we to be guided by the constitution or the other way round? Therefore, Musa Umaru Yar'dua remained the president of Nigeria while in coma, on life support machine and in another country; until Nigerians reacted.

Section 140(1) categorically states that 'a person elected to the office of president shall not begin to perform his duties until he has declared his assets and liabilities'. In on the presidential media chats, the president was asked why he hasn't declared his assets yet, President Jonathan retorted 'I don't give a damn...' It's a wonder that the president will not give a 'damn' about the constitution that brought him to power and the people who elected him there. And yet Mr. Goodluck Jonathan is still the president of the federal republic of Nigeria.

If not for the fact that the constitution has become a joke i don't think a person like Ayodele Fayose would have contested and as a result become the governor of Ekiti state for a second time. Section 182 (1.i) clarifies that anybody indicted for embezzlement or fraud by any competent law court or commission of enquiry or tribunal shall be governor. Gov Ayo Fayose has successfully by-passed this after his 'oga at the top' might have showed him the way to go about it. But before Ayo Fayose was senator Omisore and Balarabe Musa who all were indicted and impeached but still came back to contest elections.

The eligibility of President Goodluck Jonathan is still a hot topical issue. I'd rather not say anything about this since its already in the court of law, I'm also patiently waiting for the outcome of the judgment.

The recent rancour in the House of Representatives was unprecedented, uncalled for and just a wounded lion trying to savage its pride. The speaker defected, and so what! Because the speaker is a big fish and defected to the opposition party? What makes the speaker's case different from the other lawmakers who defected from APC to PDP or LP or APGA and vice versa? Section 68 (1.g), famously quoted by the IGP, is long over due, truly states a member of the House of Representatives shall vacate his seat if he moves from the political party on which platform he was elected to another party. It didn't refer to the speaker. For records purpose, Aminu Tambuwal was elected a member of the House of Representatives on the platform of ANPP before he defected to the ruling PDP so he can be elected Speaker of the house. This season has been a season of massive cross-carpeting in the legislative chambers and both major political parties have harvested in plenty folds with APC gaining the most, these legislators who decamped from one party to another are still members of their respective chambers.

It irritates me to see that the constitution holds no regards even in the eyes of the lawmakers. How can people who should know about more about the constitution brazenly abuse it and ignore it totally. Seven Ekiti lawmakers sat and impeached the speaker, Omirin. As absurd as that is, nothing has been done to correct such disaster and aberration of the constitution. A similar case, where the lawmakers sat in a guest room and promulgated impeachable allegations against the acting governor of Taraba state and he was successfully impeached. This would seem, to the western world, like dark magic has been casted on the people to continuously ignore these brazen lawlessness of the political holders and circumvention of the 'most revered' constitution.

Apparently, the only political juggernaut who tried but failed in ridiculing the constitution is former president Olusegun Obasanjo, in his infamous third term agenda.

Disclaimer: "The views/contents expressed in this article are the sole responsibility of the author(s) and do not necessarily reflect those of The Nigerian Voice. The Nigerian Voice will not be responsible or liable for any inaccurate or incorrect statements contained in this article."
Articles by Victor Terhemba
28-8-2017  From Young Leaders To Old Looters; The Trajectory Of A Failed Generation.7-7-2017  How To Prove That The Termination Of Your Employment Was Wrongful14-6-2016  Taking Extremism Out Of Islam10-11-2015  Record Labels; Non-existent In Nigeria17-10-2015  The Fallacy About FeminismMore...