The much I know about Boko Haram - Ali Modu Sheriff 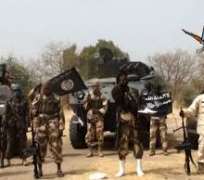 The alleged master minder sponsorer of Boko Haram,
Ali Modu Sheriff, has opened up on the much he knows about the Boko Haram whose activities traumatised lots of people in

the Northeast and some other parts of the country, while disclosing that it is only the

neighbouring Republic of Chad that could help solve the menace.

Ali while speaking in a BBC Hausa special programme (Gani

Mini Hanya), and monitored
by our correspondent in Yola
disputed reports saying that Boko Haram
started during his tenure as governor of
Borno State between 2003 and 2011. He
revealed that the sect
actually started in Yobe State in 1992,
and that he has been trying to find a
lasting solution to it, including talking to
the Chadian government.
But it would be recalled that when the
#BringBackOurGirls# campaigners visited
the Chadian embassy in Abuja recently
to find out the connection between Chad
and the Boko Haram insurgents, the
ambassador had said that his
government had no connection to the
sect.
The ambassador also alleged that if there
was any person that should be held
responsible for this problem, it should
be the Nigerian government which had
repeatedly claimed to know where the
Chibok girls are being kept.
When the ambassador was queried on
the alleged report of the botched
ceasefire deal, which was celebrated
across the country and handled by the
Chadian President, Idriss Déby, and the
report that Mr Mahamat Bichara Gnoti,
a close associate of the Chadian
president, was reported to have been
apprehended on the Chadian-Sudan
border with 19 SAM2 missiles he
allegedly purchased from the Sudanese
army for Boko Haram terrorists, the
ambassador noted that he only read
about the news on the pages of
newspapers just like other persons.
But the former governor, who is also at
the centre of a controversy surrounding
the sponsorship of the Boko Haram
insurgency, following claims by an
Australian negotiator, Steven Davis, that
he and a former chief of army staff,
General Azubuike Ihejirika, were
allegedly backing the insurgents, said
Chad could help in solving the issue.
Although, the former governor along
with Iherijika were exonerated of any
complicity during the week by the
Department of State Security (DSS), but
reacting to his exoneration by the DSS,
which paraded people it called fake
Boko Haram ceasefire negotiators that
confessed to implicating him and
Ihejirika after inducement, Sheriff said it
is the truth that has come to prevail over
falsehood and that he has been
vindicated by the latest revelations from
the arrested impostors, who allegedly
connived with the negotiator, Davis.
He alleged that the Borno State
government was responsible for the
orchestrated plot to frame him up with
the Boko Haram sponsorship allegation
in order to defame his character.
Keeping mute on how Chad could
possibly help in solving the problem,
Sheriff added that since he is one of the
few politicians that has benefitted
greatly from the kindness of Borno State,
as such he is doing whatever it is to help
solve the insurgency.
“Nothing preoccupies my mind in
Nigeria presently like the return of
peace in Borno. When Borno State was
peaceful, there was no place I cherished
to stay in the world like Maiduguri. I,
my friends, my confidants, my parents
and all the schools I attended are in
Maiduguri.
“Therefore, I am more concerned than
anybody in this country, because what
Borno State did for me has not been
done to any other indigene. You know,
in Borno State, a governor has never
been re-elected apart from me; in Borno
State, no senator has ever been elected
thrice apart from me. So, Borno people
have done everything for me, and there
is no one in this world that I know other
than Chad, which I think could help
Borno,” he said.
On his belief that he was being framed,
Sheriff said: “They defamed my
character, and when they started it, I
once told journalists that it was plotted
in Maiduguri. We know the plotters,
their motives, and that by the grace of
God, the truth will prevail; and now, the
arrested impostors have said it all to the
world.”
The former governor alleged that the
current Borno State government's
connection with plot to defame him
became glaring when the government
quickly came out to disown one of the
impostors, Junaid Khadi, who
was a special
adviser to Governor Kashim Shettima,
but rather said Khadi remained his
(Sherrif) known associate because he
had earlier served his government
before Shettima engaged him allegedly
under pressure from him.
“This is nonsense. If I had forced him
(Khadi) on them, then why will he
connive with a Whiteman to implicate
me, that I am a Boko Haram member? If
at all I helped him to be engaged,instructed my lawyers to file charges,”

he said.
It could also be recalled that President
Goodluck Jonathan had on two occasions
visited the Chadian President Idriss
Derby, in September and November this
year, toward finding a lasting solution to the long operations of the dreaded group.