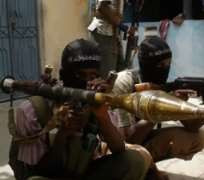 Boko Haram has kidnapped at least 185 people from the northeast Nigeria village of Gumsuri, Borno State, carting the hostages away on trucks towards the Sambisa Forest, a notorious rebel stronghold, two local officials and a vigilante leader said Thursday.

The mass abduction, part of an attack that also killed 32 people, occurred Sunday in the village of Gumsuri in the embattled northeast. Both officials, who requested anonymity, said the local government established the number of those abducted through contacting families, ward heads and emirs. A vigilante leader based in the Borno state capital Maiduguri, Usman Kakani, told AFP that fighters who were in Gumsuri during the attack provided a figure of 191 abducted, including women, girls and boys. Gumsuri is roughly 70 kilometres (43 miles) south of Maiduguri and falls on the road that leads to Chibok, where Boko Haram kidnapped more than 200 schoolgirls in April. Details of the Gumsuri attack took four days to emerge because the mobile phone network in the region has completely collapsed and many roads are impassable. Those who fled the village said it was too dangerous to head directly to Maiduguri. Instead, they travelled several hundred kilometres in the opposite direction to connect with the main road that leads to the state capital. Mukhtar Buba, a Gumsuri resident who fled to Maiduguri, also confirmed that women and children were taken. 'After killing our youths, the insurgents have taken away our wives and daughters,' he said. Boko Haram has increasingly used kidnappings to boost its supply of child fighters, porters and young women who have reportedly been used as sex slaves. The mass abductions in Chibok brought unprecedented attention to Boko Haram's five-year extremist uprising, and President Goodluck Jonathan vowed to end the conflict. But violence has escalated since April and the Gumsuri attack will no doubt cast further doubt on Nigeria's ability to contain the crisis.

Timeline of killings since April:
*April 14: 276 young girls were abducted from their school by Boko Haram gunmen in Chibok, a remote community of Borno State. Fifty-seven of the girls managed to flee, while 219 are still being held.

*April 14: At least 75 people died in a bomb blast in a packed bus station on the outskirts of Abuja — the deadliest attack yet in the city. Boko Haram claimed responsibility for it.

*August 24: Boko Haram leader Abubakar Shekau claimed he has made the town of Gwoza in Borno State part of an Islamic caliphate.

*October 18: Around 60 women and young girls were abducted around Chibok, according to witnesses. On October 25-26, 30 adolescents were kidnapped in the village of Mafa in Borno State.

*October 31: Shekau said the 219 abducted schoolgirls have been converted to Islam and married off, ruling out talks with the authorities on a ceasefire.

*November 9: Shekau said that he has created a caliphate in the more than 20 northeastern towns conquered by the insurgents.

*November 10: A suicide attack killed at least 58 people at a boys school in Potiskum in Yobe State.

*November 28: Two suicide bombers blew themselves up and gunmen opened fire during weekly prayers at the Kano Central Mosque. At least 120 people were killed and 270 others wounded.