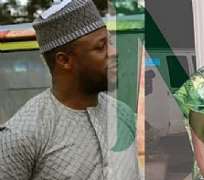 Read what Etcetera had to say: "My dear entertainers who just lost out in your quest for public office, can you please gbe enu e soun so that we can concentrate on the election at hand?

Despite your claims, we all know the reasons why you sought public office in the first place.

So many Nigerians have hurt their knees in praying to God to rid this nation of political miscreants and people with selfish motives in seeking public offices. So the fact that you all lost your primaries is a gargantuan sign that the system does not see you as worthy representatives of the Nigerian youths.

You are the reasons why the youths are only being regarded as the future in a time like this when we are supposed to be the present.

Why is it surprising to you that you lost in the primaries? The system has been analytically taking notes of your below the par exploits even within the madhouse we call entertainment industry. Don't you get it, because you are in the sacred ministry of receiving brown envelopes doesn't make you qualified to administer or make laws. In case you haven't heard, there are so many things to consider before running for public office.

I can bet that most of you don't know the issues that matter to the people of your constituency. Have you asked yourself if you are fit for that constituency? What have you done prior to this time for the people you want to represent? You can't just wake up one morning and ride on a horse down the streets like Apostle Paul on his way to Damascus and expect to be applauded into the government house? Have you built up a sufficient resume? Despite what some people would have us believe, a vast majority of successful political careers are built around impressive resumes. Think about your resume objectively. Think about running for office as a job interview.

How do you stack up to your likely competition? Don't you think a prior involvement in your constituency would add some significant padding to your resume? Another question is, are you electable? Are you the best candidate for the job? This is a question that anyone who wishes the best for his or her people should consider. Is there another potential candidate better suited to run and to serve than you are? Is it possible that your running could do more harm than good to your political ideals and priorities?

Is there a better role for you politically? If you're considering running simply as a way to get involved, maybe there's another and better role for you. Wouldn't your time and money be better spent in supporting another campaign or serving on a local board or advisory committee?
We are known as the dancing generation because of the lyrical content of your songs. To say in your interviews that you are running because you want to change the system is a lie from the pit of hell.

Haven't you heard that charity begins at home? What changes have you initiated in this madhouse we call entertainment industry? How many of you musicians seeking public office today have come out to protest against injustice artistes are facing in the hands of the cabals on radio? You are scared of challenging the smaller cabals at the radio stations who demand bribe before playing your songs, what would you do when faced with the ogbologbos in politics? You can't give what you don't have.

A head that can't produce meaningful lyrics cannot inspire anything meaningful in governance. If you can't stand for anything with your art, then you surely don't have what it takes to lead. The content of your songs says a lot about your mental capabilities. What are your long term goals? Are you running because you feel that your so-called fame indicates you can win?
Won't your personal issues affect your constituency adversely? Or you think the people are ignorant? In politics, the stench in your life will always surface eventually even if you're not willing to release the information yourself.

The masses have listened to your interviews and they know that most of you don't have the necessary knowledge of the simplest of issues. There's nothing like a campaign to expose your ignorance about a particular subject. If someone asked you a question about the particulars of an important issue, are you confident that you would be able to adequately answer it? Are you well informed about the bills or proposals currently under discussion in the elected body that you wish to serve in? Are there some important issues where you could legitimately be considered an expert?

Are you presentable? If you're not presentable, it will have an adverse effect on your campaign. You are from a job district full of people who mostly care about material things.

Don't you know that in politics, when people think your priorities are different from theirs, they will be skeptical about supporting your candidacy?

Most of you entertainers that lost in the primaries would have been political liabilities, not the assets the people crave. Some shameless nollywooders even went as far as citing Arnold Schwarzenegger's entry into the California governorship race as their inspiration for running but it didn't cross their minds that Schwarzenegger wouldn't have been eligible to run for any election in America if he was a member of any organisation as corrupt and confused as the Actors Guild of Nigeria.

Finally, for those entertainers with intentions of seeking public office in 2019 which is just around the corner, now is the time to start working on those areas you need improvement. Get some professional help if necessary. You were booted out this time around because the people don't trust your intentions.

Today, your status says elegushi loading and tomorrow sees you borrow-posing in an exotic car. You are obviously on a mission to loot. It is appalling that some entertainers are beginning to see politics as kalo-kalo and a place where people thrive in mago-mago. The same desperados have over time exhibited their willingness to put their hands in hot ororo as long as they can bring out the dodo. But that dodo has burnt their mouths this time around."
Culled from Punch