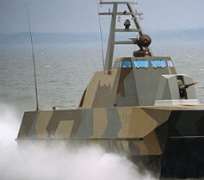 Reports by a Norwegian newspaper, Dagbladet, said that the fast-speed Hauk-class guided missile boats had been re-armed with new weaponry.

The report also revealed that Ekpemupolo's most recent purchase is a KNM Horten, a fast-attack craft now used in fighting piracy in Nigeria's waterways.

It was learnt that in spite of his alleged history of violence, Tompolo, now controls the Global West Vessel Service, a privately owned contractor for maritime security for the Nigerian Maritime Safety Agency.

Buying arms from Norway requires an export license from Nigeria's Ministry of Foreign Affairs. The ships were reportedly sold first to CAS Global, a British security company that has such a license, after which Ekpemupolo reportedly bought the ships from the British company.

Dagblade reported that the seven Norwegian ships are now part of the company's maritime fleet patrolling under a contract for the Federal Government. Punch