Atiku, Buhari, others: Too close to call in race for APC presidential ticket 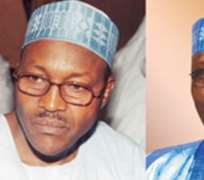 The All Progressives Congress (APC) primaries to pick their presidential candidates for the February 2015 election remains a close race as all the five aspirants are still in contention.

As at yesterday, the party had Muhammadu Buhari, Abubakar Atiku, Rabiu Kwankwaso, Rochas Okorocha and Sam Nda-Isaiah as presidential aspirants.

Before the accreditation of   8,000 delegates to determine the fate of the aspirants ended 6pm at the Teslim Balogun Stadium in Surulere, Lagos, about 12 APC governors were said to have thrown their weight behind Buhari, a former head of state.

One of our correspondents   learnt from the media aides of three of the governors that they resolved to support the former head of state on Tuesday night.

A top source, who was present at the meeting where the agreement by the 12 governors to support Buhari took place, said he was willing to bet his N10m car that Buhari would win.

He said, 'All the governors have decided that Buhari is the man for the job. And we have agreed that this project is too big for us to destroy now.

'Even the PDP are afraid of Buhari. I can bet on my car that Buhari will win.'

It was learnt that the only APC governors who were not supporting Buhari are Governors Rochas Okorocha (Imo) and Rabiu Kwankwaso (Kano), who are presidential aspirants.

Earlier on Wednesday, there were media reports that Okorocha, Kwankwaso and Nda-Isaiah had withdrawn from the race and backed Buhari.

But the three aspirants denied the report.
Before voting started, the National Convention Committee Chairman, Kayode Fayemi,     described the special convention of the PDP as   a coronation and not a convention.

He said among all the political parties in the country, only the APC was holding an open and transparent presidential primary.

Fayemi, a former governor of Ekiti State, said, 'You can see that our primary is very transparent and is offering every aspirant a level playing field unlike the PDP which is holding a coronation.

'Theirs is just an event to put a crown on Jonathan and that is not a convention.'

The Deputy Chairman of the committee, Kawu Baraje, who spoke with delegates of each of the aspirants, assured them of a level playing field.

He said each of the aspirants would have 12 delegates to monitor the primary.

The   National Publicity Secretary of the APC, Lai Mohammed,   expressed the hope that the primary would be a success.

'This is the moment Nigerians have been waiting for. We have 8,000 delegates participating,' he said.

When asked how many delegates were   from each state, Mohammed said he did not have the number.

In what appears to be a demonstration of oneness, Governors Rotimi Amaechi, Abiola Ajimobi, Adams Oshiomhole, Babatunde Fashola, Abdulfatah Ahmed and Rauf Aregbesola took a walk on the tartan tracks of   the stadium.

The walk elicited shouts among the crowd, who waved brooms painted in APC green, white and blue colours.

A delegate said, 'You can see that the governors are in one accord. They have control of their delegates.

A former Governor of Lagos State, Bola Tinubu, and an ex- National Chairman of the APC, Chief Bisi Akande,   sat side by side at the VIP section of the stadium.

Governors Babatunde Fashola(Lagos); Kazeem Shettima (Borno); and   Tanko Al-Makura(Nasarawa)   arrived at the venue almost the same time and made straight for the VIP section of the stadium.

A delegate from one of the South-West states, who spoke on condition of anonymity, explained that the contest was between   Buhari and   Abubakar, a former vice-president.

'Buhari is the preferred candidate but Atiku is pulling financial muscle,' the source said. - Punch.