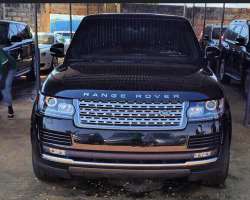 What a better way to end the year 2014, for rave of the moment singer, Davido, as he just got himself his first Christmas gift, a Range Rover Sport.

The singer who has been able to entertain his fans overtime with various hit track tunes, is not in any way relenting in his efforts as he recently released a new track titled, 'Owo ni Koko' (Money is important) and has been receiving massive airplay and downloads.

Davido as usual, took to his page to announce the arrival of his new ride and thanked all his fans for the support they have shown to him from day one, promising not to disappoint them in anyway.

Well, to some of his fans, this has not gone down well with them as they had to insult the singer in every little way they can.