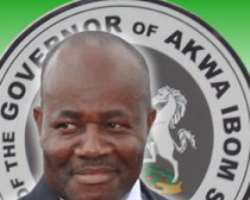 It is only a slave mind and a politically blind person that does not see that Godswill Obot Akpabio's zoning propaganda is a fraud. Akpabio is the most deceitful politician in Nigeria today. What is he zoning? To where and who?

Lets even face it, if zoning as espoused by Akpabio JP is really imperative what is the formula and basis of the zoning?

Will it be right for the same Ikot Ekpene Senatorial District to still produce the deputy governor? If no, then why is Akpabio rooting for Barr. Emmanuel Enoidem who comes from his district and tribe?

Secondly, if zoning is based on tribe, shouldn't it naturally go to the Oron tribe given that an Ibibio man in person of Arch. Obong Victor Attah had served two terms from 1999-2007 and an Annang man in person of Barr. Godswill Obot Akpabio is serving his second term as governor?

The truth of the matter is that Akpabio is a corrupt and violent liar. The whole gimmicks about 2015 is to put a structure that will allow one family from Ukana Ikot Ntuen in Essien Udim LGA to continue to loot us blind and dictate the pace in our state. It is about the interest of a violent and blood thirsty cabal.

It is only a fool or hungry person that will believe Akpabio.

Let me even ask us, who are the owners and leaders of this sinister group that goes by the name Akwa Ibom Criminal Alliance, sorry, Akwa Ibom Consolidation Alliance (ACA) that is being used to sponsor one neophyte by name Udom Emmanuel?

There are so many things in Akwa Ibom that only few courageous people can say publicly. Most outsiders praising Akpabio do so either because of their selfish interest or utter ignorance. Akwa Ibom in the last two years has received over two trillion naira from the federation account, yet, less than 50% of that amount has been used for developmental purposes.

If we the masses of Akwa Ibom State out of foolishness, ignorance or selfishness allow Akpabio, his family and cabal to install a stooge on us in 2015 then our state is mortgaged for another decade. Let us not be stupid.

There is nothing good in being a slave. The real gist is not where the next governor should come from but who can wrestle our state from the clutches of these few people who think they own Akwa Ibom State.

By the way, let us not forget that the same advocate of zoning is aspiring to the Senate despite the fact that if zoning were real, he shouldn't be doing so.

Effiong is a human right activist and political analyst in Nigeria.

And can be reached at: [email protected]