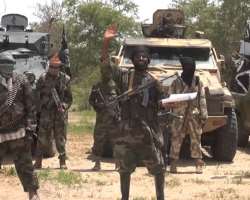 Damaturu, the Yobe State capital, has been attacked by the dreaded Islamic terrorist group, Boko Haram.

A military source in the town said scores of insurgents flooded the town from Gujba, a stronghold of the sect.

He said they attacked the town as early as 4am on Monday, trying to take control of the security facilities. According to him, they attacked the Police Mobile Unit where they exchanged gunfire with the police on duty.

He said, 'A military jet was deployed to push the insurgents back and the situation is now under control. The entire town has been cordoned off.'

He revealed that 'The number of casualties remain unknown, though many people were killed. The insurgents suffered a lot of deaths but few police officers were also killed in the crossfire.'

A resident of the town, who called in on phone, said: 'The people of the town were woken up by the sound of gunshots and explosions and we still cannot leave our homes as we are still hearing gunshots which seem to be subsiding.' Punch