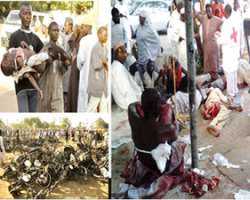 No fewer than 120 died and 270 were injured on Friday as the violent Boko Haram sect bombed the 10,000 capacity Kano Central Mosque where the Emir, Alhaji Sanusi Lamido Sanusi, usually leads prayers.

About 10 gunmen went on a shooting spree after the blast at the mosque, which is close to the Emir of Kano's palace.

A rescue official, who spoke with Agence France-Presse, put casualty figures at almost 400, adding that 120 were killed and 270 hurt in the three explosions that rocked the mosque.

The emir was said to have travelled to Saudi Arabia late on Thursday night from Paris.

Witnesses said the incident happened just as residents were getting set for Friday prayers.

'The attackers have bombed the mosque. I saw people screaming,' a local reporter who resides in Kano, Chijjani Usman, told Reuters.

Another eyewitness told the British Broadcasting Corporation that he had counted over 50 bodies immediately after the blasts.

Also, the Editor, BBC Hausa Service, Mansur Liman, was quoted as saying that people had witnessed 'horrible' scenes in a nearby hospital.

One eyewitness, who spoke with the BBC's Focus on Africa, said, 'The imam was about to start prayer when he saw somebody in a car trying to force himself into the mosque. But when people stopped him, he detonated the explosions. People started running helter-skelter.'

Another worshipper, Aminu Abdullahi, who also spoke to AFP, said, 'Two bombs exploded, one after the other, in the premises of the Grand Mosque seconds after the prayers had started.'

'A third one went off in a nearby road close to the Qadiriyya Sufi order. The blasts were followed by gunshots by the police to scare off potential attacks.'

His account was backed up by another witness, Hajara Tukur, who said she lives nearby.

A senior rescue official confirmed that several bodies had been brought to just one Kano area hospital, while over 126 people had been admitted with injuries at three facilities.

'Those figures are going to climb,' he told AFP on condition of anonymity, as he was not authorised to speak to the media.

A military official, Capt. Ikechukwu Eze, also said scores of people were feared killed and many others injured in the attack.

A check by one of our correspondents at the mortuaries of both the Murtala Mohammed Specialist Hospital and the Nasarawa Hospital in the heart of the city showed they were filled with bodies of victims of the blasts while some of them littered the ground.

Meanwhile, two suspected bomber were said to have been arrested at the scene of the incident, just as youths took to the street to protest what they called negligence by the police for not doing enough to protect the lives and property of the people.

The Kano State Police Command's Public Relations Officer, Mustapha Abubakar,confirmed the incident but declined to give the casualty.

The emir had recently called for people to arm themselves against Islamist militant group Boko Haram.

Earlier this month, the emir told a prayer meeting that people should 'acquire what they need' to protect themselves.

The Boko Haram terrorist group has killed more than 2,000 people this year, according to rights groups' reports.

The Kano blasts came after a bomb attack was also foiled at a mosque in Maiduguri on Friday morning; five days after two female suicide bombers killed over 45 people in the city.

The Emir of Kano last week doubted the Nigerian troops' ability to protect civilians and end the insurgency.

This had prompted his advice to Kano residents to arm themselves against Boko Haram attacks.

The Emir of Kano is an influential figure in Nigeria, which is home to more than 80 million Muslims, most of who live in the North.

Boko Haram has repeatedly attacked Kano before. On November 14, a suicide bomb attack at a filling station killed six people, including three policemen.

In Maiduguri, the capital of Borno State, civilian vigilantes said they had discovered a suspected remote-controlled device planted in the Gamboru Market area of the city.

It was successfully defused by the police bomb squad but as the bomb was being made safe, another device exploded nearby. There were no casualties, as the area had been cordoned off.

'Our assumption is that the bombs were planted ahead of Friday prayers in the mosque just nearby,' civilian vigilante Babakura Adam said.

'Of course, it is Boko Haram's handiwork because in the last few days several arrests have been made of suspected female suicide bombers.'

Adam said the arrests were made on Wednesday and Thursday.

Fears have grown in Maiduguri about an upsurge in Boko Haram attacks, after the militant Islamists took over more than two dozen towns in Borno and two neighbouring states in recent months.

Meanwhile, President Goodluck Jonathan on Friday promised that the attackers would be held accountable.

He spoke in a statement at the commissioning of the Federal High Court complex in Asaba, Delta state.

The President, who spoke through the Governor of Delta State, Dr. Emmanuel Uduaghan, commended the Chief Judge and other justices in the state for their support for government's resolve to hold accountable all the perpetrators of terrorist acts across the country.

He said the presence of a high court in virtually all the states of the federation was a good development as it would bring justice closer to the people.

Jonathan said, 'I have been duly informed that the practice directions issued by the court has contributed significantly to the reduction of trial delays and engendered speedy trial of terrorism and allied offences.

'This is in tandem with this administration's determined efforts to expand access to justice for the people and ensure that Nigerians are able to access the courts for the purposes of resolving their disputes.'

The President also directed all security agencies in the country to launch what he called a full-scale investigation into the blast that occurred at the Central Mosque in Kano.

He asked them to leave no stone unturned until all terror agents across the country are apprehended and prosecuted.

Jonathan gave the directive in a statement by his Special Adviser on Media and Publicity, Dr. Reuben Abati, in which he described the Kano incident as a heinous attack.

In the face of the attacks however, the President called on all Nigerians not to despair 'in this moment of great trial in our nation's history.'

He asked them to remain united to confront the common enemy. He appealed to them to remain vigilant and cooperate with security agencies to win the on-going war against terror.

The statement read, 'President Goodluck Ebele Jonathan extends heartfelt condolences to the people and Government of Kano State over the heinous attack on the Central Mosque in Kano, earlier today.

'He commiserates with all the families who lost their loved ones. The President calls on relief agencies and medical personnel to deploy every possible effort to assist the injured, and the general public to heed the call for the donation of blood by the hospitals where the injured are being treated.

'The President has further directed the security agencies to launch a full-scale investigation and to leave no stone unturned until all agents of terror undermining the right of every citizen to life and dignity, are tracked down and brought to justice.

'The President reaffirms that terrorism in all its forms and manifestation is a despicable and unjustifiable threat to our society. He reiterates the determination of the government to continue to take every step to put an end to the reprehensible acts of all groups and persons involved in acts of terrorism.

'President Jonathan calls on all Nigerians not to despair in this moment of great trial in our nation's history but to remain united to confront the common enemy.

'The President is confident that no terrorist act against fellow citizens will destroy the Nigerian spirit to remain positive, resolute and united in the quest for lasting peace and security in the country.

'He appeals to all Nigerians to remain vigilant and cooperate actively with our security agencies to win the on-going war against terror.'

The Northern socio-cultural group, the Arewa Consultative Forum, described the attack as wicked, callous and barbaric.

The ACF, through its National Publicity Secretary, Muhammad Ibrahim in Kaduna on Friday, said the group received the news of the blasts with shock and disbelief, adding that the several attacks in some part of the North in recent time were most disturbing.

According to the ACF, the insecurity situation in the region is a clear manifestation of the Federal Government's inability to protect the lives and property of Nigerians.

The Forum, therefore, called on the Federal Government to deploy all its apparatus to areas that are being confronted with Boko Haram insurgency.

A statement issued by the group read, 'The Arewa Consultative Forum learnt with shock and disbelief the three bomb explosions that occurred in the Central Mosque near the Emir's palace in Kano city. The bomb blast aimed at Muslims in the mosque that left many dead and scores of others injured was wicked, callous and barbaric.

'The recent bomb explosions in Yola, Maiduguri, Azare, Kontagora and many other towns in the North coupled with the daily killing of innocent people by insurgents are very disturbing and worrisome.

'This insecurity situation that has engulfed the North is a clear manifestation of Federal Government's inability to protect the people as intelligence and equipment required to contain the situation appears lacking.

'ACF urges the people of Kano in particular to exercise some restrain, remain calm and avoid taking the law into their hands or blamed innocent people that have lived with them peacefully. We equally call upon the people to unite and protect themselves through intelligence sharing with security agencies.'

The ACF, however, appealed to the Kano State Government and other states rocked by bomb explosions in the last one week to provide free medical treatment to the injured victims. Agency report