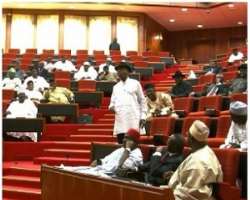 The Senate has described allegations of corruption levelled against the National Assembly by former President, Olusegun Obasanjo, as unfortunate and a deliberate attempt to denigrate the institution.

In a statement by the Senate's spokesman, Senator Enyinnaya Abaribe, the Senate said it was unfortunate that the former President would distort the issue of constituency projects as meaning a direct monetary advance to lawmakers, thus amounting to the promotion of corruption by the National Assembly.

The Senate spokesman said: 'The allegation, as spurious as it were, is very distant from the truth and is nowhere near reality'.

He further emphasised that if it were so, the former President would not have tolerated such for the period he was the President of the country.

Senator Abaribe also stated that President Obasanjo, for the avoidance of doubt, was the initiator of the constituency project in year 2000 as a means of ensuring that projects were fairly spread across the country using the Senatorial zones as the springboard.

He stated that it was curious and surprising that President Obasanjo would turn around, after over ten years of initiating such a project, to allege that the National Assembly was performing the function of both the executive and the parliament.

The Senate further asked the former President to go a step further to furnish Nigerians with details of how the National Assembly members became executors of national budget rather than being lawmakers.

Chief Obasanjo had on Wednesday during a book launch in Abuja, accused the federal lawmakers of corruption. He said: 'Apart from shrouding the remunerations of the National Assembly in opaqueness and without transparency, they indulge in extorting money from departments, contractors and ministries in two ways. They do so during visits to their projects and programmes and in the process of budget approval when they build up budgets for ministries and departments who agree to give it back to them in contracts that they do not execute. They do similar things during their inquiries.'

According to the former president, 'corruption in the National Assembly also includes what they call constituency projects, which they give to their agents to execute but invariably full payment is made with little or no job done. In all this, if the executive is not absolutely above board, the offending members of the National Assembly resort to subtle or open threat, intimidation and blackmail. When the executive pays the huge money, normally in millions of dollars, all is quiet in form of whitewashed reports that fail to deal effectively with the issues investigated'.