Dwindling revenue: FG to raise N480bn through luxury tax, others 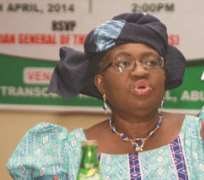 The Federal Government is targeting additional revenue of N480bn within the next three years from the implementation of the tax on luxury goods and other austerity measures recently announced by the Minister of Finance, Dr. Ngozi Okonjo-Iweala.

The minister had on November 16 announced the measures following the persistent drop in the price of crude oil in the international market.

Speaking at the fourth edition of the Capital Market Committee retreat in Abuja on Thursday, Okonjo-Iweala listed the areas where the amount would be generated to include taxes on luxury items as well as stoppage of abuses of investment incentives, such as exemptions and waivers.

The luxury goods being targeted for taxation, according to Okonjo-Iweala, include private jets, yachts, expensive vehicles and alcoholic beverages.

The minister also said the Federal Government would assist the Nigerian Customs Service to block existing leakages and loopholes in order to generate more revenue.

Other areas that would help boost revenue, she said, included remittance of surpluses to the treasury by all agencies of government in line with all extant laws establishing them; and the strengthening of tax administration to boost non-oil tax collections.

She said, 'On the revenue side, a lot of work was already underway prior to the fall in price to improve non-oil revenue generation.

'There are also ongoing efforts to ensure that all agencies of government comply with all extant laws relating to their remittance of surpluses to the treasury, including the strict implementation of Mr. President's directive on agencies and parastatals' remittances to the treasury.

'This is crucial as many agencies have not been remitting surpluses to the treasury as they should. In this regard, I recently met with the managing directors of banks to ensure their collaboration and compliance.

'Still on the revenue side, we are looking at our policies on investment incentives, and waivers and exemptions, and are working with the National Investment Promotion Council to stem the tide of abuses.

'Over 30 per cent of companies operating under pioneer status abuse their tax exempt status. We shall also look at Customs to plug existing leakages and loopholes to enhance revenues.

'We are also introducing surcharges on certain luxury goods in the country, not only to raise additional revenue but also to ensure that the better-off in our society contribute a little bit more to easing the pain resulting from the current economic headwinds.

The minister, who spoke on the theme, 'Competing in an uncertain world,' told the audience that the drop in oil price would not in any way rattle the economic management team because the situation had been expected since 2008 during the period of the global financial crisis.

For instance, she recalled how in 2012 she predicted that the persistent rise in price of oil was not 'sustainable' owing to what she described as 'possible reduction in global oil demand and increased global oil supply as new discoveries in Africa and elsewhere come on stream.' - Punch.