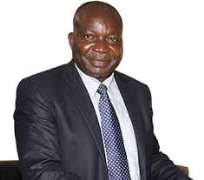 The Vice Chancellor of Michael Okpara University of Agriculture Umudike , Abia State, Professor Hilary Edeoga, has vigorously  protested the non release of the university's take-off grant 22 years after its establishment, and the partial release of its annual capital allocations.

Edeoga who registered his protest when the House of Representatives Committee on Education  visited the institution as part of its oversight function, alleged that  the unfair treatment being meted out to the university by the federal government amounted to marginalisation of its host geopolitical zone- the South East.

His words: 'Our Capital budget is not fully released. This is my fourth year as VC. In the first year, the budget was N300 million, I didn't get up to N100 million; the second year, the same thing . This year, it came down to N222 million, I don't know whether we have received up to N6 million, and we have barely one month to go.

'It is mind bugling that out of the three federal universities of Agriculture established by Gen. Ibrahim Babangida's regime some 22 years ago, we are the only one yet to receive  take off grant, Markurdi got, Abeokuta got, Umudike didn't get till date.

' As if that is not enough, recently our sister university at Markurdi has been granted approval to start running programmes in Medical Sciences.  We wrote for our own but it is yet to be considered. Are you saying that we have not been forgiven for loosing the Biafran civil war? I thought we are saying no victor no vanquished?

' Don't continue to make us feel we don't belong to Nigeria.  Look at the roads in this part of the country, very deplorable.

' We grow fish , rear pigs and run poultry to know whether we can make money to boost our internally generated revenue to be able to meet our financial requirements because no federal university charges school fees. What they are charging are for examination, medical, library and hostel. We are not making profits at all.'

The VC noted that, but for funds from Tertiary Education Fund , NEEDS funds and the institution's IGR, infrastructural development in the university would have since stopped.

He, therefore,  pleaded for the intervention of the lawmakers by facilitating the full release of their budgetary allocations.

Responding, the Chairman of the House Committee on Education, Hon. Aminu Suleman, assured the VC that the House would prevail on the National University Commission to grant approval for the running of medical sciences if the basic requirements had been met, adding that the issue of take-off grant should also be considered done.

He had earlier on his opening remarks said their visit was to monitor the implementation of budgets in the institution to ascertain whether or not there was compliance with the law.

'It is only proper that we visit institutions to see how what has been provided is being utilised for us to see the justification in appropriating more so that we continue to perfect the system in the overall public interest.'

He attributed the decay and constant strike actions in public tertiary institutions to none implementation of budgets as most of the causes for the agitations had all been provided in the budget.

' It beats the imagination why we are still having  strikes, lecturers still complaining , and why we are still living under deplorable conditions in our institutions when provisions have been made  in the budget.'

He posited that ' provisions made in the budget and duly signed by the President  are being operated at the pleasures of Ministers and for us , we view it as criminal because once appropriation act is being passed and duly assented to by the President, nobody no matter how highly placed has any power to tamper  with it.'

Suleman described as worisome ' a situation where policies, decisions and projects that were agreed upon between the National Assembly, Government and the receiving institution, are being systematically jeopardised.' Punch