Why I really want to rule Nigeria - Buhari 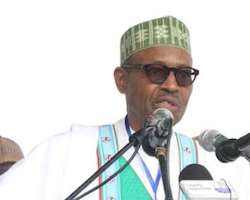 Former Military Head of State, General Muhammadu Buhari (rtd) has explained why he is in the 2015 presidential race on the platform of the All Progressives Congress (APC).

He said if elected president, he wants to galvanize the economy and lead a general turn around in Nigeria. He said he also wants to provide gainful employment to the masses.

Buhari spoke during a visit to Rivers State to solicit the support of APC national delegates in the state ahead of the party's presidential primaries.

Addressing the delegates at the Banquet Hall of Government House, Port Harcourt, Wednesday, Buhari bemoaned the infrastructural decay in the country and the poor leadership offered by the ruling Peoples Democratic Party (PDP).

'My message is just to remind all of us about the condition we are in this country and that next year 2015 is another political watershed in this country. If we allow by any means the PDP to continue, I don't think by the end of their next term of four years even Nigerians can recognize their country, because all you need to do is to compare what state we were in 1999 when the PDP took over the centre and most of the states.

'Instead of seeing improvement in infrastructure, in way of life, quality of education, healthcare that immediately concerns the people, everything is going down, so Nigerians must vote PDP out next year. It is a question of survival. If you want our country, you want your son and your grandson to get education, to get healthcare, to get drinking water, to get security, you have to vote PDP out and I am here to ask you for your understanding and support because the journey of a million miles starts with one step.

'This is what APC is all about. We agreed to come together because we found out, no single political party could make any difference. As I said from 1999 till now, collapse of infrastructure, economy, manufacturing, therefore lack of jobs, therefore crises of all sorts,' Buhari stated.

He accused the PDP of lacking accountability and wondered how Nigeria could progress without an accountable leadership. 'How can we go forward in this country if there is no accountability?' He queried.

On insecurity in the North-East, Buhari lambasted the federal government for failing to arrest the situation. He said efforts made by federal lawmakers to probe finances allocated to the country's military were frustrated by government agents.

Amaechi who earlier addressed the state national delegates of the APC, said Buhari is a good presidential choice for the country to bring about change.

Again, he refuted claims that the former head of state is a religious fanatic.

'When I went to Ignatius Ajuru University yesterday, one young woman got up and said governor, 'you have convinced me, I will vote for APC, but I have a problem', and I said, what is your problem? She said 'they say APC is an Islamic party, it will Islamize Nigeria,' and I said they are referring to Buhari, so let me address her straight: Buhari's driver is a Christian, his cook is a Christian, who else, the most important staff for a big man is his cook before his driver. So, if a man (like Buhari) can insure his life to somebody who does not belong to his religion, how else will he show you that he is not a religious bigot?'

'Now, those of us who have known him, we want to present him to you. If he wins primaries, we will present the true Buhari to Nigerians because they need to know that he is a different person from what these selfish politicians have portrayed him to be,' Amaechi said.

He urged party members to be dedicated and work for APC's victory next year and advised national delegates from the state not to accept any financial inducement at the party's forthcoming presidential primaries in Lagos.

Amaechi also appealed to party members to get their permanent voter's cards and sensitize other APC supporters in the grassroots to also get theirs or go for fresh registration.