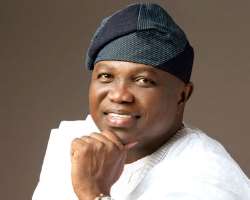 WITH the multitudi­nous sea of human heads I saw at the Onikan Stadium, Lagos Island, Lagos, on October 24, 2014, the day Akinwunmi Ambode, an administrator par excellence and public finance management icon, declared his epochal candidacy for the office of the Governor of Lagos State, on the platform of the All Pro­gressives Congress (APC), some­thing just intimated me to the fact that certainly this is the man that would most likely take over from one of the exceptional leaders in the current political dispensation in Nigeria, Governor Babatunde Raji Fashola (SAN).

If indeed figures have anything to with democracy and elections, the innumerable crowd I saw on that occasion was summative of what to expect next February when the polls take place. I know of rented crowds for mega rallies to give the decep­tive impression that such a gathering is a confirmation of the candidate's popularity and associated prospects of victory at the concomitant elec­toral contest. The October 24 as­sembly was real as the air, flora and fauna in that vicinity could testify. What I witnessed that day—the out­pouring of emotion, belief and com­mitment to the party's strong vision and leadership— is demonstrative of convictional superfluity of the emergence of this man as the APC candidate and consequently Gov. Fashola's successor. It is obvious that whosoever the APC endorses for the race is the next governor of this centre of excellence, Even op­positional forces know this full well and there is nothing anyone can do about it for now!

At the risk of overconfidence and summit optimism, with the predomi­nance of the APC in the South West, especially Lagos State where Gov. Fashola has so distinguished him­self to the point of unusual acknowl­edgement by the stalwarts of the Peoples Democratic Party (PDP), there would be no contest in Lagos, And if for procedural electoral for­malities there is a competition after the primaries, the margin of victory for the APC will be astoundingly significant. It is incontrovertible that Lagos is the stronghold of the APC and unthinkable that there could be any polling upset.

The reportage that ensued after Ambode's carnival-like October declaration was unprecedented. The impression I got the next day, Sat­urday morning, at the Lagos Airport on a trip to Kano en route to Katsina State at the invitation of my friend and governor, Dr. (Barrister) Ibra­him Shehu Shema, one of the few referential governors in the country, was almost hallucinatory! Virtually all the seven national newspapers I bought that morning celebrated the event as if Ambode had just been sworn in—when in reality it was just mere declaration.

Another thing that captured my interest was the spread of the publications. If it had just been one particular medium, there wouldn't have been any sur­prises. It foretells what is about to unstoppably happen. The imagery, the concept, the picture, the goal and the actualization are well laid out for Ambode's Oval Office occupation on May 29, 2015.

I am very sure that on December 2, 2014, when the APC holds its state governorship primaries, Am­bode will emerge as the consensual candidate to bear the party's revo­lutionary torch. Everything points at the unanimity of his choice on grounds of his local governments' service robust antecedents and ex­ponentially profound civil service career of unparalleled distinction. Ambode, a former Accountant- General, incontrovertibly has played critical and catalytic roles in the ad­ministrative successes of the state so much that on retirement Gov. Fashola profusely commended him.

The outpouring of celebratory emo­tions and unsolicited testimonial avowals and overheard reaffirma­tions by Lagosians on that declara­tive day last month at the Onikan Stadium were justificatory of what to expect in February 2015 when the elections hold. It will take only unexpected divine intervention to alter this conclusively overwhelm­ing proposition.

There is no doubt the PDP is waiting on the wings to reap any whirlwind that may engulf the APC should its elders and leader not get their act together. May that never occur because Lagosians need someone who will consolidate on Gov. Fashola's quintessence by completing the mega-city plan en­visaged for the state. A PDP option, going by most of their members' scandalous pedigree, will take La­gos back to 1967! It is unimaginable that in no circumstance can the PDP have a foothold here, particularly with its track record of incompe­tence and incapacity exemplified by its rapacious membership.The only challenge that will confront the APC leadership with regard to Lagos is that all the aspirants are eminently qualified to be the party's choice for the one-horse race.

With this kind of scenario, the best way out will be for a pooling and subjection of individual interests of aspirants for the greater glory of the party and by extrapolation Lagosians. Personal ambitions must be collapsed to en­sure that the PDP is resoundingly trounced and routed next February.

It is also good to underscore the zoning policy of the APC which will go a long way in reducing misgiv­ings about the ultimate governorship choice made. Zoning, if credibly ap­plied and respected by one and all, minimizes representational squab­bles to a large extent such that each aspirant will see clearly the futility of any selfish pursuit against the col­lectivity of preferences and internal party mechanisms. The APC should not emulate the PDP which does not respect zoning principles agreed to by its members because of anticipa­tory pecuniary objectives.

What I do not understand about zoning is why aspirants from other senatorial zones other than the ac­cepted one still go ahead to pursue their vaulting dreams! This is the is­sue in my Abia State where the stuff was zoned to us in Ukwa-Ngwa, yet other zones are more in the race than us! It is simply ungentlemanly, traitorous and plainly ludicrous. The same thing is also happening in La­gos. Ambode from Epe Division in East Senatorial District where the 2015 governorship slot has been zoned to has a battery of aspirants from other zones to contend with. I do not understand this deliberate precipitation of needless crises that could jeopardize things and expose the state to national political rapists and official bandits under a tattered umbrella!

For me and my legion of follow­ers in Lagos, Akinwunmi Ambode is the exceptional man to take over from extraordinary BRF by God's grace! Fashola's shoes will be too big for any other fellow apart from our focus today! Ambode is the most capable person to dust other parties' fringe candidates, who are mere pretenders to the competition.

The results will confirm this standpoint. This candidate of mine, who is su­perlatively passionate about Lagos, was born on June 14, 1964. In 1981, he recorded the second best result in HSCE in West Africa and proceeded to my alma mater, UNILAG, where he graduated in accounting at the age of 21. Three years later, Am­bode completed his master's degree in accounting on Federal Govern­ment's scholarship and also char­tered. This fellow 'Great Akokite' must win at both levels: primaries and governorship!