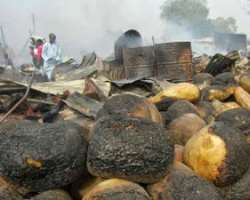 Two suicide bombers - a male and female - attacked a heavily populated Maiduguri market, killing scores of people, an eyewitness, Yusuf Ahmed, said on Tuesday.An unconfirmed source said 65 corpses had been evacuated while others claimed 30 people were killed in the explosion.Ahmed said on the telephone, 'As I am talking to you, people are still trying to rescue the injured and evacuate the corpses.

It is difficult to know the number of casualties.'He said the place had been condoned off by security agencies making it difficult to assist in the rescue operations.

A youth vigilante source confirmed that the female attacker kept a parcel in one of the shops on One-way, a commercial area beside the popular Monday Market, telling the traders that she had something to pick from the market,'The package detonated few minutes later. And as people were still wondering what happened and trying to rescue the injured, a bomber in the same area detonated a bomb planted on her; this claimed so many lives,' the source said.