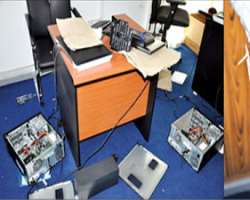 Operatives of the Department of State Service and soldiers attached to the security unit code-named Operation MESA on Saturday stormed the All Progressives Congress data centre in Lagos and arrested 25 data agents and three security guards.

SUNDAY PUNCH learnt that the security agents also ransacked the duplex located on Ajibola Street, off Allen Avenue, Ikeja, and confiscated computer hardware, which contained the data of APC members in several parts of the country.

Our correspondent, who visited the office, observed that all the rooms were turned inside out, while computer parts were scattered in the building.

It was learnt that the security operatives arrived at the centre as early as 6am and ransacked the building for about two hours before arresting those found on the premises.

According to sources, the DSS acted on a tip-off that the centre was allegedly being used as a warehouse by a former Governor of Lagos State, Bola Tinubu, to produce and issue fake Permanent Voter Cards, while another version had it that weapons were being kept at the centre.

However, the National Publicity Secretary of the APC, Lai Mohammed, said in a statement that the act was part of a ploy by the Peoples Democratic Party-led Federal Government to intimidate the APC ahead of the 2015 elections.

Narrating what transpired, Mohammed said, 'In the early hours of Saturday morning, a combined team of men of the DSS and OP-MESA stormed the Bola Ajibola Data Centre belonging to the APC in the Ikeja area of Lagos and arrested 25 APC data agents and three security guards.

'In what was a Gestapo-like operation, the APC membership data centre located at Number 10, Bola Ajibola Street, came under siege between the hours of 5.30am and 7.30am on Saturday.

'An operation of terror and brigandage was unleashed on a legitimate operation of a leading national party. They came without a search warrant for the premises.

'Over 50 security operatives drafted from Abuja operations blocked the two major street entrances to the APC data entry centre, pulled down the gates and spent over two hours ransacking and vandalising the centre. More than a dozen computers were destroyed. The server was also vandalised along with other equipment in the building.

'Just like the Watergate scandal in the USA, the state-sponsored security operatives, apparently acting at the behest of the ruling PDP government, turned the office upside down and pulled out and vandalised everything in sight.

'If the PDP-led government and the security agents had done due diligence and acted professionally, they would have known that the APC data centre is a legitimate operation and the (members of) staff are Nigerian youths who were left jobless by the Jonathan government.

'They chose to believe the lie that it was a warehouse belonging to one of the national leaders of the party where dangerous weapons were being kept, when in fact it is a centre for entering the data provided by the millions of Nigerians who registered as members of the party (APC) during its membership registration exercise.'

Mohammed said the DSS were acting on 'weak and misinformed intelligence,' describing the incident as 'the worst political scandal in Nigeria's history.'

He maintained that the action must not go unpunished.

Also, the Publicity Secretary of the APC in Lagos, Mr. Joe Igbokwe, in a statement on Saturday, described the raid by security operatives as 'a bestial expression of the dangerous desperation with which the PDP wants to retain after wrecking the country and leaving it prostrate in sixteen years of tragic misrule.'

Igbokwe warned that Nigeria was 'at the very precincts of a brute, callous and dangerous era occasioned by the deadly means a party that has failed Nigeria and humanity strives to retain power at all costs.'

The statement partly read, 'Coming after the unsuccessful bid to remove the Speaker of the House of Representatives through an illegal police action, and the sponsoring of direct attack aimed at a takeover of the Ekiti State House of Assembly by seven out of the 26 members of the Assembly, we see PDP's increasing resort to foul and illegal means as capable of destroying the fragile Nigerian democracy.

'While we join in the demand for an independent enquiry into the armed invasion of our data centre, we warn that nothing, not even the deployment of illegal brute force, should deter Nigerians from pursuing and securing change needed to recover a badly wrecked country in 2015.'

Reacting to the invasion, the President, Trade Union Congress, Mr. Bala Kaigama, warned the political class and security agencies against stressing the patience of Nigerians in the interest of democracy.

Kaigama urged politicians and security operatives to exercise restraint in the performance of their responsibilities.

The TUC President urged security agencies to create conducive environment for the growth of democracy in the country.

He advised that emerging problems should be dealt with in accordance with the rule of law.

Kaigama said, 'The politicians should allow us to rest in the country. That is part of what we say we don't want. If there are problems, the rule of law should take care.

'We don't want overzealousness from security agencies and politicians so that they don't stress out the patience of Nigerians.'

When contacted over the matter, the National Publicity Secretary of the PDP, Mr. Olisa Metuh, said he would get back to our correspondent but he did not, as of the time of going to the press.

Legal practitioners also condemned the attack on the APC office.

A Senior Advocate of Nigeria, Kemi Pinheiro, said invasion of a political party's office by security operatives was inimical to the nation's democracy.

He said, 'Nobody is above the law; not even the law enforcers. Unless the security operatives who searched the office of the All Progressives Congress did so with a search warrant, their action is absolutely unacceptable. That this happened is a sad thing for me. No authority in this country should act with impunity. Invading the office of a political party is a new height for our security agencies.

Another SAN, Dr. Joseph Nwobike, described the involvement of soldiers in the attack as inconceivable.

'I'm not justifying it or criticising it. If the DSS visits the office of the political party in furtherance of its investigative activities, that may be acceptable. The whole issue is not clear now. But for the soldiers, it is completely inconceivable. Soldiers are not involved in internal security,' he said.

The senior lawyer advised that security agencies should stay away from offices of political parties, as parties are also stakeholders in the overall management and development of the country.

Similarly, human rights lawyer, Fred Agbaje, who condemned the action, however stated that nobody could prevent security agencies from investigating any offence.

He said, 'If any of the political parties is planning or is engaging in any act possible of breaking law and order, the Police or any concerned security agencies of the nation can act to intervene. But if at the end of the day, there is no concrete outcome to their investigation and invasion, they might have acted unlawfully.

'By invading the office of the APC, the security agencies have exposed themselves to wanton violation of right to privacy, right to dignity and all that. There is something negative about all these things. They can't just invade a political party's office without justification.

'Let me also add that the constitutional infraction by the security agents will only make the PDP-led Federal Government more unpopular in the eyes of the electorate.'

When SUNDAY PUNCH contacted the Department of State Services for explanation on its action, the organisation's Deputy Director, Public Relations, Marilyn Ogar, stated that the service received a petition that the building was being used to clone the Independent National Electoral Commission Permanent Voter Card, adding that the agency carried out an operation to investigate the allegation.

According to her, DSS operatives retrieved a server, three hard drives and 31 'Ghana must go' bags of hard copies of data, adding that a number of people at the office were also arrested.

Ogar stated that the building had no sign to indicate that it was an APC office, noting that investigation had commenced.

She said, 'Nobody knew it was an APC office because there was no sign to indicate that it was their office. Based on a petition that some people are cloning INEC Permanent Voters' Card in the building at 10, Bola Ajibola Street, off Allen Avenue, Ikeja, our personnel carried out an operation there this morning (Saturday) and recovered a server, three hard drives and 31 'Ghana must go' bags filled with hard data, for analysis.

'We have commenced investigation and this would show whether the allegations in the petition are true or not. There was no sign that the building belonged to APC or any other party, it was when they got to the office after they recovered the data captured, that they learnt that the building was being used by the APC. We are being proactive on account of the security situation in the country, you know that the Boko Haram has been targeting Lagos and so, we cannot afford the petition lying low.' Punch