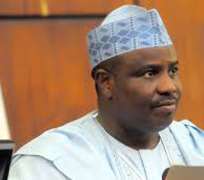 'It is not only untrue and mere fabricated reports that the NSA met with the VP and ordered the arrest of Hon Tambuwal. The fact is that the National Security Adviser, Sambo Dasuki, has been outside the country since Wednesday on pressing national security issues,” he stated.

In a similar way, the IGP also joined other security chiefs in refuting the reports. In a statement issued by the Force Public Relations Officer (FPRO), Emmanuel Ojukwu, Abba 'denied issuing any arrest order on any particular person.' The police boss said there is no such directive on those 'involved in the attack on policemen, or the disturbance of public peace, at the premises of the National Assembly, Abuja on Thursday, 20 November, 2014. Rather, it lies with the investigating police officers to determine who to invite, quiz and prosecute as the case may be.'

Abba also reacted to the alleged attack by some people on Police officers in Ibadan, who were supposedly 'providing security at a political rally in Oke Ado area of Ibadan, Oyo State, during which a police inspector was shot dead and five others sustained grievous injuries,' saying the attack was 'unwarranted.'

However, a statement issued by the All Progressive Congress National Publicity Secretary, Alhaji Lai Mohammed, in Ijebu-Ode, Ogun State Saturday, the party said the Federal Government would be igniting a crisis by arresting Tambuwal after its failed attempt to prevent him from accessing the National Assembly to preside over the affairs of the House of Representatives on Thursday, and also in an apparent attempt to halt the current move to impeach the President.

''Published reports have corroborated what we know: That the plan on Thursday was to prevent Tambuwal from entering the National Assembly to pave the way for his Deputy, Emeka Ihedioha, who had already been allowed into the House, to preside over the removal of the Speaker. Were it not so, why would the police even try to seize the mace from the Sergeant-at-arms, as reported? Why would the police detain the Sergeant-at-arms for his refusal? What is the business of the police with the mace, which is the House's symbol of authority?

''It has also now been corroborated that the plan hatched by the PDP and the Presidency was to give Tambuwal the ''Ekiti treatment'', in which seven PDP members removed the Speaker in a 26-member House of Assembly. But for the quick thinking and action by the Honorable members who scaled the gate to access the Assembly, that plan would have succeeded and Tambuwal would have been removed as Speaker, the consequences of which no one would have been able to foretell.

''Therefore, instead of pillorying those who scaled the gate, we should be commending them for risking their lives to save our democracy. Those who shut the gate against the lawmakers and barred them from carrying out their constitutional duties are the villains, not the honorable members who acted in the nation's interest,'' it said.APC said the ceaseless hounding of Tambuwal by the President and the PDP is patently provocative, to say the least, and calls into question the stated commitment of the Jonathan Administration to the rule of law.

But the ONSA advised the general public to be very vigilant and not be hoodwinked by propaganda of desperate politicians who are willing to sacrifice the security, unity, peace and stability of the country in the alter of selfish political gains.'

The statement also warned that the NSA 'will not tolerate inflammatory and unguarded utterances that is capable of jeopardising the peaceful conduct of the 2015 general elections.