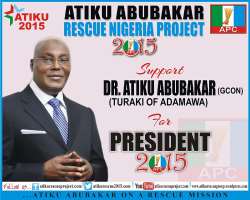 Atiku Abubukar Rescue Nigeria Project 2015 (AARNP) a political campaign organization supporting the candidate of Alhaji Abubukar Atiku for the presidential Race 2015 has called on the All Progressive Congress Delegates to vote in Alhaji Atiku Abububar in the Upcoming National Party Convention.

The Request was made by the National Co-ordinator of the Campaign Organization Comrade Nnanna Nwafor When he featured in a Radio Programme “Democracy & People” in Enugu.

He stress that “Atiku Abubakar is the most detribalized Nigerian, have accessible leadership figure in Nigeria with close links to citizen at all levels nationwide. Turaki has a large Heart and the number of qualities required of a true leader and has a close relationship with the grassroots .With the dwindling Economic status of the country only Atiku has the political and Economic knowledge to stabilize our battered Economy, Solve the security challenges and create Jobs for millions of unemployed Youths if elected into the office of the president have acquired requisite experience and knowledge in management of Nigeria Polity and Economic stability.

He Asserted that Nigerian State is on the cross Road occasioned by non Performance of the Present Government. It is only Atiku that has the experience to rescue the country from the political logjams it found herself as an outstanding politician with excellence. He stands for true democracy and Good Governance in the interest of the nation.

He regretted that under the watch of the present Government our GDP has gradually declined and Nigerian state has suffered the following economic and Political deficiencies.

. Unemployment in the increase and Lack of Job Creation.

. Roadblock from 1/40km to 2/3km.
. Oil bunkering for 10,000/barrels to 100,000/
barrels.
. WASSCE from 40% to over 70% failures.
. Stealing in billions of Naira to billions of
DOLLARS.
.Granting of State Pardon to Convicts.
.Continued missing of Billions of Dollars in NNPC.
.Increase foreign borrowings and Loans.
. Budget implementation from 40% to less than
20% per year
. Roads from potholes to road cut ups and
Death traps
. Economy from better to Worse in Africa,
The masses from poor to poorest
. Political Movement from PDP to APC and Massive settlement of Political allies with the state funds

. Bribery and Corruption baptized to stealing.

. Lastly, ATM charges from non to now N65/
He urges the party Delegates to vote for Alhaji Atiku because he is strategically position to give the Peoples Democratic Party candidate a good match in the presidential polls.

As part of our Advocacy Strategy to inform the Party Delegates about his candidature and Galvanized Support Ahead of the upcoming All Progressive Congress (APC) National Party Convention. We are presently consulting with the Party chieftains and The local Government Chairmen's of the Party in the states to convince the DELEGATES to vote for TURAKI to emerge as the Party Flag bearer in the Presidential Election, Because he has the Political Muscle to Wrestle power from the Peoples Democratic Party(PDP) based on his past antecedent, pedigree and achievement.